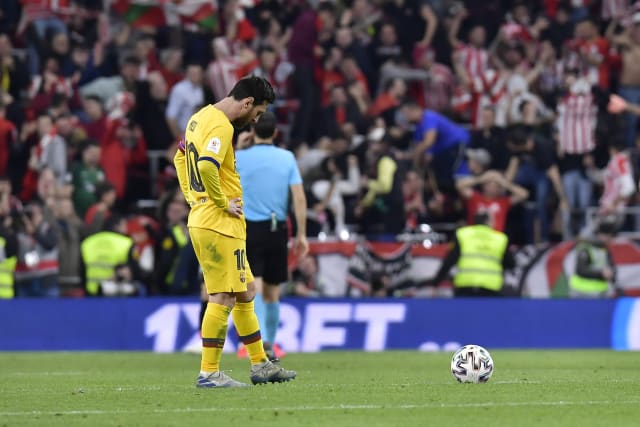 ​​Quique Setien felt his Barcelona side had deserved better than to be handed a shock 1-0 stoppage-time defeat in their Copa del Rey quarter-final at Athletic Bilbao.

Barcelona were looking to stay on course for a seventh straight final appearance, but their run ended in San Mames, where Inaki Williams’ header clinched a dramatic victory.

Extra-time and the possibly a penalty shootout were looming when Williams glanced the ball past Marc-Andre Ter Stegen to spark wild celebrations from the hosts.

Barcelona had seen Athletic goalkeeper Unai Simon make a string of fine saves but were unable to make the most of their openings when on another evening they would have run out comfortable winners.

“We are leaving this competition, it is painful, but the image of the team has been very good,” Setien told a press conference.

“Everything went well today except the result and us not continuing in the cup. I am quite satisfied.

“The game was as we wanted it, we dominated the whole of the second half, but the penalty is not to get ahead with one of those chances.

“We must congratulate the opponent because they put the ball in the goal, which we could not do.”

Setien added: “Sadly the goal has come to us at a time when there was no chance of a reaction.

“I don’t know why, maybe because of the confidence of the players, but there are things we cannot control, and this is one of them.”

Defender Gerard Pique insisted now was not the time for inquests, as Lionel Messi’s row with sporting director Eric Abidal had overshadowed the build-up to the cup tie.

“From there, we have to keep working, not throwing things in our faces from now until the end of the season, because it doesn’t help.

“We have to focus on our style of play and on winning; at this club, we have been founded on victories and we have to return to that path.”

Asked if Barcelona are a club in crisis, Pique responded: “It’s not the time to dig up dirt, which all clubs have.

“What I can say is that our confidence is at its highest, we’re happy with the way we’ve played and reacted to the outside noise.

“It’s really hard because we were eliminated; we took an important step, we had a very positive feeling – it was a very important step forward.”

Athletic’s last of 23 Copa del Rey triumphs came in 1984, but with LaLiga leaders Real Madrid also having crashed out at home to Real Sociedad, the competition is wide open.

“The work of the team has been enormous. We do not give up and we recover from the bad times. We are not easy to beat,” said coach Gaizka Garitano.

“I am happy for the people because this is a lift for everyone. Nights like this reinforce our philosophy, even if we have difficulties.”