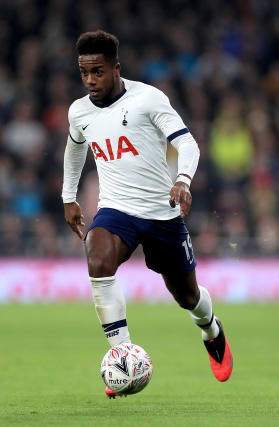 Ryan Sessegnon admits he has been battling with himself as he tries to make an impact at Tottenham.

The 19-year-old has had to endure a difficult start to his Spurs career following his £25million summer move from Fulham, where he became a teenage sensation known for his left-wing displays.

He first had to overcome a serious hamstring injury, then was sparingly used by former boss Mauricio Pochettino before being deployed at left-back by Jose Mourinho.

Sessegnon says life under the Portuguese has been a steep learning curve as he tries come to terms with life at a top club.

He produced one of his best performances of his short time at the club in the 3-2 FA Cup fourth-round win over Southampton and is ready to put the hard work in.

“To play under a coach like Mourinho is very tactical,” he said. “He doesn’t like to concede goals, so I’m trying to adjust my game in a defensive way as well.

“He wants me to be aggressive, so that’s what I’m trying to do.

“I think you have to work on it. Over the years I’ve worked on trying to better myself, working hard in training, analysing my game and stuff like that.

“It comes with experience of games and stuff.

“It’s been coming. Every time I go on the pitch I try to be positive and in recent weeks when I’ve had the chance it’s probably been a bit negative.

“When I came to Spurs, it was tough at the start but I’m starting to find my feet and the more games I play the more confident I am.”

Sessegnon did not play for Spurs until November, which was a far cry from his time at Fulham, where he was well on his way to 100 appearances by his 18th birthday.

“It was tough, really tough,” he admitted. “It was my first serious injury and to come to a big club like this, I was trying to find my feet.

“I came back in training and then I felt it again, so it was tough. Thankfully I’m now pain-free and enjoying my football.

“Coming to the game quite young, I was used to playing every game without any type of injuries.

“To come to a big club when I’m still young, still developing, still learning, to get an injury like that was mentally and physically tough.

Sessegnon was part of the Spurs side that edged past the Saints thanks to two goals in the last 12 minutes.

Ralph Hasenhuttl’s men looked on course for the fifth round after goals from Shane Long and Danny Ings put them in front, but they collapsed.

Nathan Redmond says his side are kicking themselves.

“Those minor instances and little lapses in concentration in games cost you against teams who have amazing quality,” he told the club’s official website.

“Coming off the back of playing at Anfield, we’ve shown a good performance. I think we were the better of the two sides today, but there’s lessons to learn.

“We’re not afraid to be behind, because we stick to the game plan and we need to progress with that when we go in front as well.

“There’s a lot to look back on. In any competition, we want to show how hard we’ve been working in the last few months to turn our season around.”