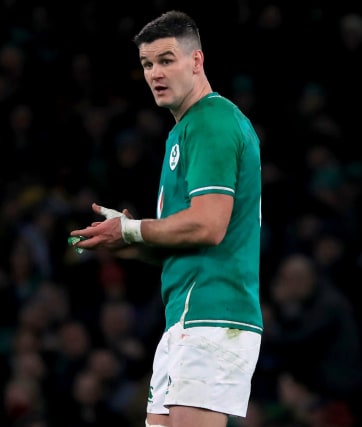 Ireland captain Johnny Sexton believes Wales counterpart Alun Wyn Jones “is a great example” of a player who is able to put pressure on referees.

The experienced duo are set to go head to head when their teams meet for a compelling Guinness Six Nations clash in Dublin.

Fly-half Sexton replaced retired hooker Rory Best as Ireland skipper ahead of the tournament and was frustrated his team were on the receiving end of some puzzling penalty calls from French referee Mathieu Raynal during the opening-weekend win over Scotland.

The 34-year-old is keen to avoid a repeat and pointed to Welsh lock Wyn Jones as a prime example of someone who has the personality to pressurise match officials into reviewing decisions.

“There were a few things I would like to do different in and around some of the decisions that went against us, that I could have done a little bit better,” said Sexton.

“How I can get him (the referee) to maybe look at it is an area that I maybe need to improve but we had a good relationship throughout.

“He listened to me, I listened to him, and we worked together. But, yeah, there were a few (questionable) decisions there – I think Scotland said the same thing.

“Some of the best captains I ever watched growing up, they seemed to put the pressure on the refs quite well, and Alun Wyn Jones is a great example.

“He has that balance right, he has a good relationship with them but he’s able to apply pressure at times and sometimes get them to check things.

“It is a bit of a skill and he’s obviously done it (been a captain) for a lot longer.”

While Sexton scored all of his team’s points during the 19-12 success over the Scots, Wyn Jones led the reigning Grand Slam champions to an emphatic bonus-point triumph over Italy on his 135th international appearance.

Saturday’s fixture, which could have a major bearing on the destination of this year’s title, will feature another French official, Romain Poite.

Sexton has sought advice from former Ireland captains about how to conduct himself and received a thought-provoking anecdote from ex-British and Irish Lions lock Paul O’Connell involving Poite and the possibility of appearing overly aggressive.

“I spoke to Paulie and there was one time he was playing against the Ospreys and Romain Poite was the ref and he took his gumshield out and he had no teeth in and he spits through his teeth – Paulie looks angry at the best of times, even when he’s happy – and he was just standing over Romain Poite,” said Sexton.

“What he was saying was probably perfectly acceptable but the way it looked, or the way Romain felt, maybe was not quite right.

“Everyone makes mistakes in different parts of their game or leadership and I’ve made plenty of the years but I like to think I’ve learnt some good lessons.”

Wales completed last year’s tournament clean sweep with a convincing 25-7 victory over Ireland on a rain-soaked evening in Cardiff.

The memory of that result, which ended Ireland’s hopes of retaining the Six Nations title after they had refused permission for the Principality Stadium roof to be closed, still stings Sexton.

Testing weather conditions are again forecast this weekend and the Leinster man hopes his team can whip up the home crowd with an improved performance after being disappointed with the atmosphere at the Aviva Stadium against Scotland.

“It was flat. I actually said that to the lads when we were coming in after the warm-up,” he said.

“I just felt that we needed to start well to get the crowd into it and we didn’t really do that.

“The level of our performance needs to go up this week.

“If we’re going to win, we need to be a lot better in all areas and we’re preparing to be that, hopefully.”