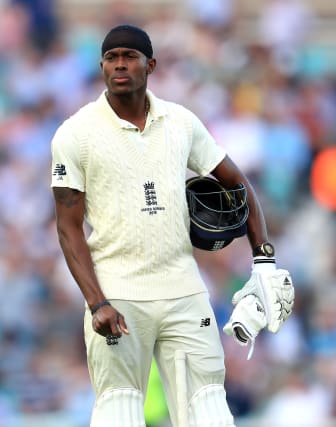 England paceman Jofra Archer has been ruled out of next month’s two-Test series in Sri Lanka as well as the Indian Premier League because of the right elbow injury that blighted his tour of South Africa.

Archer missed the final three Tests against the Proteas and after it was revealed he would miss the Twenty20 series he returned to the United Kingdom, where a scan has revealed a low grade stress fracture.

Likely to be out of action for around three months, Archer will undergo another scan in four weeks and could commence a back to bowling programme soon afterwards, with a view to returning for the start of the English summer.

“The scans confirmed that Archer has suffered a low grade stress fracture of the right elbow. As a result of the injury, he has been ruled out of England’s Test tour of Sri Lanka and the Indian Premier League 2020 season.

“He will now commence an injury rehabilitation programme with the ECB medical team with a view to be ready for the international summer campaign starting in June against West Indies in a three-match Test series.”

Archer first had a scan on his elbow after being ruled out of the second Test at Cape Town because of pain in the area last month, which showed no major damage. It was thought he would be available for the final Test at Johannesburg but he was a late withdrawal.

However, the nature of the injury often means the first scan shows nothing significant. Only when the swelling had reduced did Archer undergo a more sophisticated scan, which involved injecting dye into the joint to show inflammation.

The results, which rules Archer out of the series in Sri Lanka, where a whopping 60 World Test Championship points are available per match, completes a difficult first winter on England duty for Archer.

Archer was England’s leading wicket-taker in their triumphant World Cup campaign and then took 22 scalps at an average of 20.27 in the Ashes in a breakthrough international summer. However, he struggled on the tour to New Zealand.

He missed the T20 series between the teams but took only two wickets in the two-Test series, where he struggled to get to grips with the Kookaburra ball and flat pitches, while he was racially abused in the opener at Mount Maunganui.

He took five for 102 in his last bowling innings as England lost heavily in Centurion to start their tour of South Africa, after which injury struck.

The 24-year-old was one of a number of England’s World Cup winners rested from the ongoing one-day international series but he was expected to return, alongside Ben Stokes, Jos Buttler and Mark Wood, for the three T20s.

After Sri Lanka, Archer was scheduled to feature in the IPL, where he, Buttler, Stokes and Tom Curran are registered with Rajasthan Royals.

However, he will now turn his attention towards getting fit for England’s first assignment of the summer: the first of three Tests against the West Indies, starting on June 4 at The Oval.