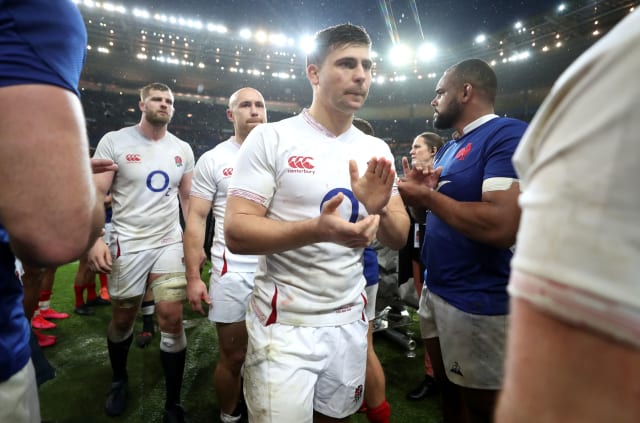 England will attempt to rescue their Guinness Six Nations title quest with a revamped team after Eddie Jones made five changes to the starting XV for Saturday’s Calcutta Cup clash with Scotland.

Ben Youngs’ demotion to the bench is the biggest call of the major surgery performed in response to the 24-17 defeat by France that kicked off England’s campaign in such disappointing fashion.

Youngs has been first choice scrum-half for virtually the entirety of the Jones era but he has been replaced in the starting XV by Willi Heinz and is limited to supplying cover from the bench.

The final change is enforced by Manu Tuilagi’s absence for at least one match because of a groin strain, creating an opening at outside centre for Jonathan Joseph.

“The main consideration is always the same – pick the best 23,” Jones said,

“We’ve just changed the order of a number of players to get the right balance to the game. This is not rotation, we are picking the best 23.

“We’re not happy with how we played in the first 40 minutes against France and this is a new game and we have a great chance to play well.

“Willi’s been in the 23 for most games. This week he’s starting and Ben will finish. We just think at the start of the game that he will be the type of player who will be useful.

“Willi has got great experience. He’s played with a number of good players and has experienced rugby in the northern and southern hemispheres.

“He’s got a good solid, all-round game, is a good communicator and has a calm head.

“They pick two sevens so there’s going to be a lot of competition there.

“It’s a different role for Joseph and obviously he doesn’t have the direct running skills of Manu but has other skills and if we can find some space we’ll be able to use them.”

George Furbank endured an error-strewn Test debut in Paris but he survives at full-back and is present as part of an unchanged back three.

There is no Luke Cowan-Dickie on the bench due to his partner going into labour, so Tom Dunn could make his debut as a replacement, as could uncapped Saracens flanker Ben Earl.

Jones had opted for a six-two split of forwards and backs on the bench, pointing to a game plan of overpowering Scotland up front as England look to bounce back from two comprehensive defeats in succession.

“Consistency is a challenge for every team. Sometimes the circumstances make it difficult to find your best and we found that last week,” he said.

“We’re always trying to learn and find ways to get better, we had a good lesson last week. Sometimes these things need to be learned.”