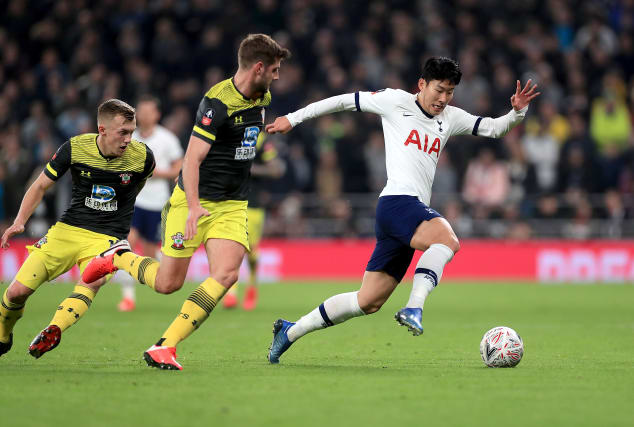 Spurs overcame a lengthy absentee list to book a fifth-round tie at home to Norwich thanks to late goals from Lucas Moura and Son Heung-min.

Mourinho lost five players to injury, had a half-fit Dele Alli, was unable to pick Steven Bergwijn and thought his side were going out after Southampton goals by Shane Long and Danny Ings had overturned an early Jack Stephens own-goal.

"I had to manage this chess game without pieces," he said. "You know – no bishops, no kings, no queens. Very, very hard with so many injuries and problems. No Bergwijn.

"I cannot speak about the progress I want to make because I don't have the players I want.

"We lose so many: Sissoko, Harry, and today Lamela, Lo Celso and Bergwijn. It is so difficult.

"One game we have players A, B and C out and then the next game we are without D, E and F. It's been a very difficult season.

"So everything was like when you pull a blanket up and your feet are left out and then you cover your feet but half of your body is out. That's us. But amazing spirit, and that is something I like.

Mourinho's words were of little comfort to Saints boss Ralph Hasenhuttl, who confirmed that James Ward-Prowse' serious-looking injury was not as bad as first feared.

"It is easy for him to praise us. They were more clinical because in the last 15 minutes they turned the table in the way that is part of a good team.

"We couldn't defend how we wanted to because this is very disappointing for me. Being strong for 75 minutes is not enough."