Pope denies anti-semitism allegations after being charged by FA 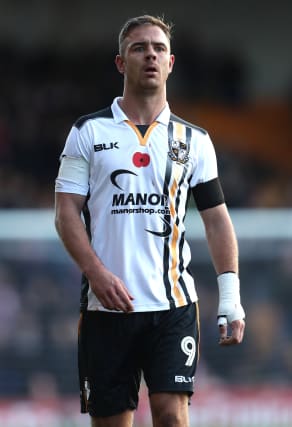 Port Vale forward Tom Pope has denied posting anti-Semitic messages on social media after being charged by the Football Association.

Pope is facing the prospect of a further ban relating to social media after being charged with an ‘aggravated breach’ of FA rules.

The 34-year-old has served two one-game suspensions this season for making “improper” comments on Twitter, but now faces a more serious charge.

An FA statement said: “Tom Pope has been charged with a breach of FA Rule E3 in relation to a social media post on 5 January 2020.

“It is alleged that his social media activity breaches FA Rule E3(1) as it was abusive and/or insulting and/or improper and/or brought the game into disrepute.

“It is also alleged that his social media activity constitutes an ‘Aggravated Breach’, which is defined in FA Rule E3(2), as it included a reference, whether expressed or implied, to race and/or religion and/or ethnic origin.

A statement from Port Vale said Pope would contest the charge.

“The Port Vale forward strongly denies allegations that his Twitter comments made ‘a reference, whether expressed or implied, to race and/or religion and/or ethnic origin’ and will vigorously defend the charge,” the statement said.

In tweets sent in early January Pope, having been asked to “predict the WWIII result”, wrote: “We invade Iran then Cuba then North Korea then the Rothchilds (sic) are crowned champions of every bank on the planet.”

Pope later deleted the tweet, insisting he was unaware it could be perceived as anti-Semitic, and the player plans to contest the FA charge.

Shortly after deleting the tweet, Pope issued a statement apologising for any offence caused.

“Following the reaction to my response on Twitter about the Rothschilds, I was unaware of any link between the Rothchild family and the Jewish community,” the statement said.

“If I have caused offence to anyone, I’d like to apologise enormously as this was never my intention.”

The charge exposes Pope to the risk of a further suspension, with the 34-year-old having already served one-game bans in November and January this season.

Pope created a storm on social media after his goal in the third-round FA Cup tie against Manchester City backed up his pre-match bravado in a personal battle with City defender John Stones.

Last summer, Pope mocked Stones in a tweet, claiming he would score 40 goals a season if he faced the England international every week, but he followed up his goal by saying it would be “more like 50”.