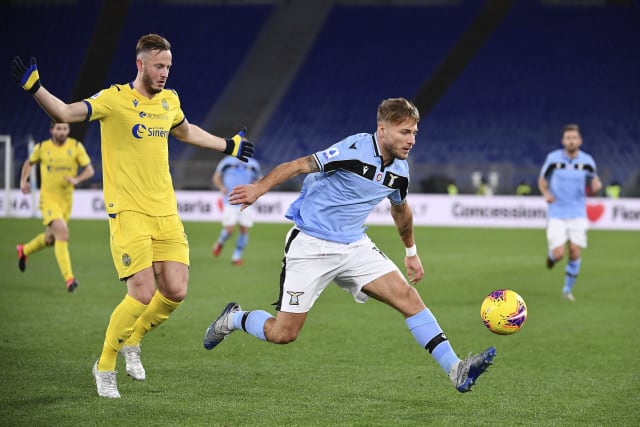 Lazio missed the chance to move second in Serie A after they were held to a goalless draw at home by Verona.

Ciro Immobile went into the game having scored 25 goals in 21 league appearances, but he endured a quiet evening and Lazio had goalkeeper Thomas Strakosha to thank for taking a point as he made a superb double save to deny Matteo Pessina and then Fabio Borini in the 16th minute.

In Ligue 1, a superb solo effort from Dimitri Payet helped second-placed Marseille to a 2-0 win at St Etienne and moved them six points clear of Rennes in third.

Payet turned Yann M’Vila inside out before firing home at the near post from a tight angle to open the scoring in the seventh minute and Nemanja Radonjic sealed the points five minutes from time with his fifth goal of the season.

Montpellier moved three points behind fourth-placed Lille after they were held to a 1-1 draw by Metz.

Teji Savanier’s 13th-minute strike put the home side in front, but Metz were awarded a penalty seven minutes later when Geronimo Rulli brought down Ibrahima Niane.

The goalkeeper made amends with a smart save to deny Habib Diallo, but the visitors did grab an equaliser 10 minutes from time when substitute Farid Boulaya fired home shortly after coming on.

Lyon missed the chance to move fifth after playing out a goalless draw at home to Amiens, while Reims and Nice drew 1-1, with Yunis Abdelhamid cancelling out Pierre Lees Melou’s opener.

Brest missed a penalty and had Jean-Charles Castelletto sent off but still managed to take a point in a 1-1 draw at home to Bordeaux, Waris Majeed’s solitary strike earned Strasbourg victory at bottom club Toulouse and first-half goals from Yassine Benrahou and Nolan Roux secured Nimes a 2-0 win over Dijon.