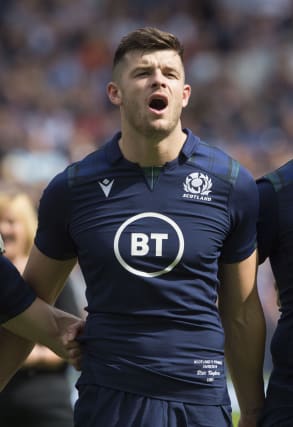 Blair Kinghorn insists Scotland have the tools to unpick England on Saturday.

The key to opening up the Auld Enemy’s defence has been held by Finn Russell in recent times but the stand-off will be absent again at Murrayfield this weekend.

The Racing 92 playmaker produced rugby’s moment of 2018 with his daring long pass to Huw Jones in the build-up to a Sean Maitland’s score as Eddie Jones’ men were stunned in Edinburgh.

Russell was the architect again last year at Twickenham as the Scots produced a brilliant comeback from 31-0 down to claim a draw that saw them retain the Calcutta Cup.

However, he will be back in France when Kinghorn and the rest of Gregor Townsend’s team run out to face the Red Rose line-up on Saturday after being disciplined for a late-night drinking session ahead of last week’s Guinness Six Nations opener with Ireland.

The Scots went down 19-12 in Dublin after wasting a string of golden opportunities – including skipper Stuart Hogg’s horror try-line fumble.

But Edinburgh full-back Kinghorn is confident Scotland have the firepower required to blow England’s doors open.

He said: “Finn is a great player but I have full belief in everyone in the team.

“Adam Hastings played really well on Saturday against Ireland. And it is great to see boys like Huw Jones coming back into some form. He’s a devastating player.

“I fully believe we have all the creativity we need. The review after the Ireland game was good. We’ve did some really positive things on Saturday but we know games like that we need to win.

“Losing is not fun at all. We had chances to win but we gave away too many penalties and turnover ball at crucial points.

“It’s something we’ve looked pretty hard at but it’s never nice to lose, especially when we had not won over there for 10 years, so it was a big opportunity.

“Every time you come back from a loss you come in, look at the footage and try to bounce onto the next game – and there is no better one than England at home.

“Everyone is looking to get stuck in. We were frustrated after the game but it’s one of those things.

“It’s a quick turnaround so we’ve only got time to look at the things we can improve and then move on.

“It would mean everything to win on Saturday. It’s a massive game at home and we want to retain the Calcutta Cup and the points for the table.”

Scotland were glad to leave 2019 behind after a disappointing championship campaign which produced just one win was followed up by a pool-stage exit at the World Cup.

The defeat to Andy Farrell’s team last week was not the way they were hoping to start the new year but Kinghorn hopes to kick-start the Scots’ season this weekend.

“We’ve not had the results we’ve wanted in the last year or so,” he confessed. “We all know that and have all held our hands up to that. But we’re working hard to fix it.

“Even though we didn’t get the result last week, we showed some really positive things away to Ireland.

“So Saturday is a massive game for us. I fully belief we can get a result and that can kick-start a really successful year for us.

“Everyone in the team is really positive and we have full belief in ourselves that we can put in a winning performance.”