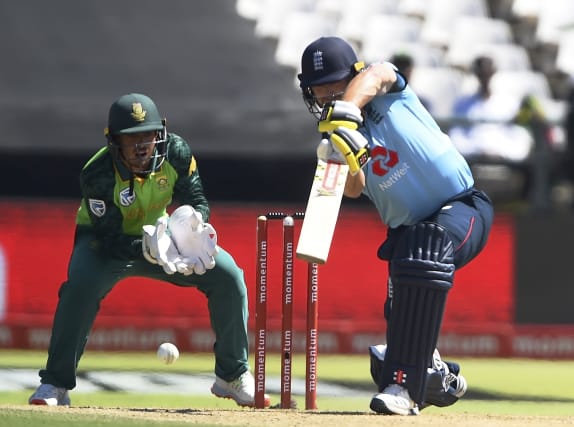 Joe Denly rescued England in their first one-day international since winning last year’s World Cup after they had flirted with capitulation against South Africa in Cape Town.

The decision to choose the 33-year-old Denly for a series which marks the start of the next World Cup cycle was questioned in some quarters but the Kent batsman vindicated his selection with an ODI best 87 off 103 balls in England’s 258 for eight.

A somewhat modest total was mitigated by a slow pitch, where left-arm wrist-spinner Tabraiz Shamsi made use of some turn and a hint of bounce to claim three wickets as England lurched from 51 without loss to 131 for six.

Chris Woakes – one of only five players retained from the unforgettable World Cup final against New Zealand at Lord’s last July – marked his 100th ODI with a cameo of 40 in a 91-run partnership with Denly.

Tom Banton made just 18 on his ODI debut as all of England’s top six reached double figures, but only Denly was able to make anything tangible after the tourists were invited to bat first under gloriously sunny skies.

It looked to be business as usual for Jason Roy as he took three successive fours off Beuran Hendricks but shortly after a half-century opening stand alongside Jonny Bairstow, both batsmen perished in short order.

South Africa’s fielding had been decidedly ordinary but Rassie van der Dussen produced a moment of magic to see off Joe Root, who had set off for a single but had to turn back towards the non-striker’s end and was still short of his crease when his stumps were thrown down from all of 30 yards away.

By the time captain Eoin Morgan (11) got a thin edge to first slip off Shamsi, England had slipped to 83 for four, with all of their World Cup-winning top four back in the pavilion.

Banton needed eight deliveries to get off the mark but looked to be gradually growing in confidence before missing a sweep off Shamsi to be trapped lbw for 18 as England were left on 108 for five and in considerable trouble.

The steady trickle of wickets continued as Sam Curran was bowled round his legs after missing a sweep as England lurched to 131 for six in the 28th over and in danger of not completing their allotment.

Left with a sizeable rebuilding job, Denly and Woakes hunkered down as they wisely eschewed any risk early on, helped in part by South Africa letting the pair take the odd single as they adjusted to the pace of the pitch.

Woakes was the first to show any sign of aggression before Denly followed, the latter reaching his third ODI half-century and first since September 2009 off 72 balls, as England breached 200.

Woakes drove loosely to mid-off but Denly dispatched Lungi Ngidi’s slower ball for England’s first six in the 47th over.

He was dropped moments later at cover by Smuts on 78 before holing out to long-on although his efforts lifted England to what seems a competitive total at halfway.