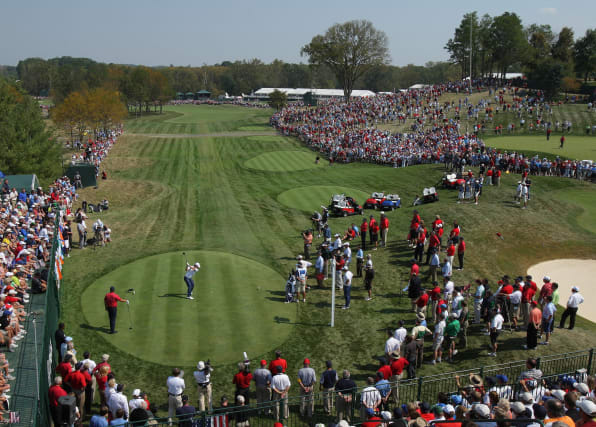 Golf’s governing bodies intend to break the “ever-increasing cycle of hitting distances”, but admit it could take years before solutions are found.

Advances in fitness and golf equipment technology have seen players hit the ball further and further in recent years, leading to golf courses being lengthened in an effort to continue to test the world’s best.

In a Joint Statement of Principles issued in 2002, the R&A and USGA stated that if “meaningful increases in distance arrive, (we) would feel it immediately necessary to seek ways of protecting the game”, but it took until 2018 for an admission that their “line in the sand” had been crossed.

That prompted the launch of a two-year Distance Insights Report (DIR) which was published on Tuesday and concedes that “an increasing number of courses… are at risk of becoming less challenging or ultimately obsolete”.

However, a further nine to 12 months of consultation will now take place before any potential rule changes are proposed, after which equipment manufacturers will be given the chance to have their input.

“It will be a multi-year process,” USGA executive director Mike Davis admitted.

The USGA and R&A will assess the potential of a “local rule” which would allow tournament committees to “specify use of clubs and/or balls intended to result in shorter hitting distances”.

That raises the prospect of limited-distance equipment being a requirement for entry into certain tournaments, although Augusta National chairman Fred Ridley said last year “it’s very unlikely that we would ever produce a Masters ball”.

Asked on Tuesday about such a prospect, R&A chief executive Martin Slumbers told the PA news agency: “No, it’s not what we have in mind; I wouldn’t draw that conclusion.

“We are certainly not putting solutions on the table at this point on that.

“In the next 45 days we will issue research topics that we want to work with the industry on, but the local rule is more about creating options for the game as we go forward.”

Slumbers added: “I think this is a pivotal moment for the game. We have come at this from a point of view of trying to find a solution to what is a very difficult problem.

“Just over two years ago we agreed with our colleagues in America we would do a very detailed piece of research into the overall impact of distance and that’s what we are publishing today.

“The conclusion is that this is the time now that we need to bring the ever-increasing cycle of hitting distance to an end and start the debate on solutions.”

The USGA and R&A have pledged to review their current specifications for conforming equipment to see if they require “tightening or adjusting”, but such potential changes would be aimed at top-level professionals and amateurs, rather than recreational players.

Questioned as to why it has taken so long to get to this point, Slumbers said: “The ‘line in the sand’ comment led to the detailed work that we’ve done.

“It is a difficult problem and there is a process that we need go through to have this debate. We have to do this in the right way.

“It’s very important that we bring the industry with us for the game to ensure it’s thriving 50 years from now. This difficult problem will only reach its solution stage if we all work together.