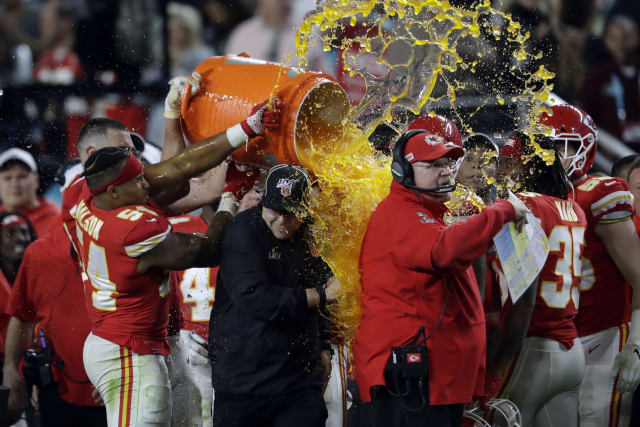 Quarterback Patrick Mahomes was named MVP after throwing touchdowns to Travis Kelce and Damian Williams and running in another, with running back Williams also scoring on the ground.

Here, the PA news agency addresses the key questions about the big game and the season as a whole.

What happened in the big game?

The 49ers jumped out to a strong start, intercepting Mahomes twice to take a 20-10 lead thanks to touchdowns by Kyle Juszczyk and Raheem Mostert, and looked in position to run out the clock.

Coach Kyle Shanahan – who was also the offensive co-ordinator for the Atlanta Falcons’ Super Bowl LI collapse against the New England Patriots – surprisingly focused on the passing game and the Chiefs’ defence got stops with enough time on the clock for Mahomes to lead a comeback and Andy Reid to shake the label of the most successful coach never to win a Super Bowl.

Ah, yes, the Patriots – where were they?

Tom Brady’s side had appeared in four of the previous five Super Bowls, winning three, but their offence faltered this season and they were dumped out in the wild card round by the Tennessee Titans – the surprise package who also beat the top-seeded Baltimore Ravens before losing to the Chiefs in the AFC Championship game.

Brady, 42, is out of contract in Foxborough but plans to play on next season.

So is Mahomes the new man to watch?

He has been for the last couple of seasons, winning NFL MVP last year in his first campaign as a starter before adding Super Bowl honours this time around – the youngest ever Super Bowl MVP.

Along with the Baltimore Ravens’ Lamar Jackson, this year’s regular-season MVP, Mahomes is leading a new wave of gunslingers – the Houston Texans’ Deshaun Watson is also firmly in that group and the Arizona Cardinals’ number one draft pick Kyler Murray showed potential, while the more experienced Russell Wilson ensures his Seattle Seahawks remain a force.

What were the stories of the season?

Jackson threw for 3,127 yards and ran for 1,206 – the latter figure an all-time record for a quarterback – with 43 combined touchdowns helping him unanimously win MVP but his side stalled in the play-offs after a bye week.

The Chiefs edged the Patriots for a crucial first-round bye after the latter’s shock week-17 loss to the Miami Dolphins, while the Titans rode a hot finish under quarterback Ryan Tannehill into the play-offs where running back Derrick Henry caused havoc.

The Dolphins had appeared to be ‘tanking’ for a top draft pick – but their eventual five wins opened the door for the 2-14 Cincinnati Bengals to have first refusal on Louisiana State quarterback sensation Joe Burrow.

Several high-profile players had nightmare years – none more so than Antonio Brown. The receiver was traded by the Pittsburgh Steelers to the Oakland Raiders, released after an off-season of bizarre off-field behaviour, signed by the Patriots and cut after one game having been accused of sexual misconduct by two women and of sending threatening text messages to one of them.

The draft, with Burrow the presumptive number one selection ahead of Ohio State pass-rusher Chase Young, takes place from April 23-25 in Las Vegas – which will also welcome a franchise for the first time after the Raiders’ relocation.

There may be an extensive game of quarterback musical chairs in free agency – possibly involving Brady – while the likes of Mahomes, Watson and the Dallas Cowboys’ Dak Prescott are in line for bumper new contracts.

Next season’s schedule is still to be set but is expected to start with a Chiefs home game on Thursday, September 10. Tampa Bay hosts Super Bowl LV on February 7.