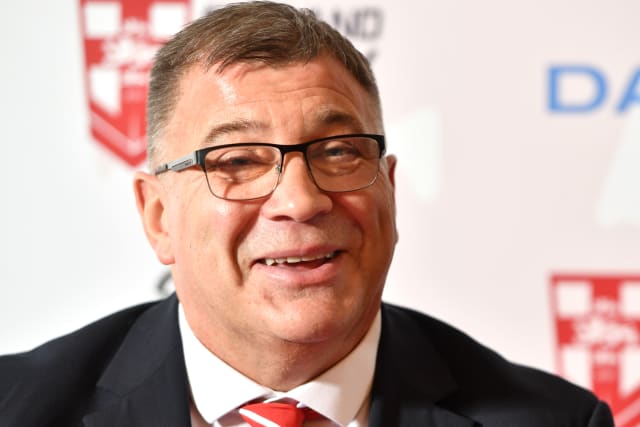 Shaun Wane insists he will do the job his way after succeeding Australian Wayne Bennett as England coach.

The Rugby Football League turned to the former Wigan boss after deciding the national team’s requirement in the run-up to the 2021 World Cup was a full-time coach based in England.

Bennett was jettisoned after doing the job at arm’s length for four years while concentrating on his full-time role in the NRL and Wane says he will learn from his predecessor’s perceived faults.

“When I was a club coach I said I would have done things differently and now I’m England coach, I will do,” he said after starting his two-year contract with immediate effect.

“I’ll not only liaise with the head coaches but physios, strength and conditioners and the players playing for that club.

“It’s showing them the respect they deserve and making sure they’re included in everything. It’s about getting that link back.

“I watch most games anyway but I’ll be going to more games, meeting more players and I’ll go out to Super League clubs watching them train.

“I don’t know how important that was to the previous coach. I think it would have been had he been here but the fact is I’m here and it’s massively important. It’s also the decent thing to do.

“When I sent players away on international duty, I needed that feedback and connection and it wasn’t the way I wanted it. Now I’ve got a chance to improve that.”

Great Britain’s disastrous tour of New Zealand and Papua New Guinea proved the last straw for RFL chief executive Ralph Rimmer and Wane admitted he was frustrated as he watched the matches from 11,000 miles away.

Bennett was heavily criticised for his tour selection and in particular his decision to play stand-off Blake Austin on the wing despite Ash Handley having flown over from England for the last match.

“I’m very different to Wayne Bennett,” Wane said. “I don’t know all the details of what he did. He would have had his own reasons.

Bennett was also condemned in some quarters for selecting Australia-born players in his Lions squad but Wane insists he will not be restricting himself to England-born players.

“Anybody who is flying fit and healthy who I think can help us win the Ashes will play,” he said.

“I desperately want to win the Ashes, can you imagine that for a Wigan kid? I never thought it would happen so I want us to do that and go into the World Cup flying with confidence.”

Wane, who said he had an option to go full-time in his job with the Scottish Rugby Union, says his priority as England coach is to select his assistants and meet with senior players.

He will organise regular meetings for elite Super League players and make plans to fly out to Australia to link-up with the NRL-based contingent.

“I want to get out there quite a bit and make sure those players get the same information as our English Super League players are getting,” he said.