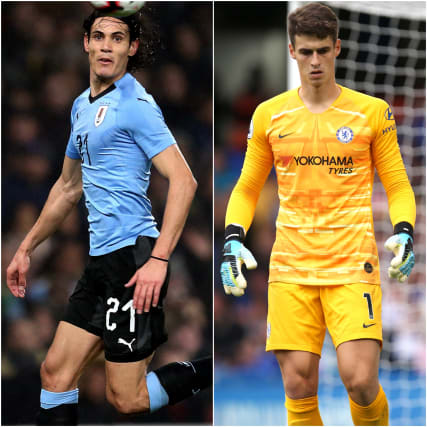 Edinson Cavani was a wanted man for many clubs in January, but by the end of the month he still called Paris Saint-Germain home. Atletico Madrid president Enrique Cerezo has spoken out about the club’s failure to secure Cavani, saying “we’re not here to be robbed”. According to ESPN, Atletico were unwilling to meet Paris Saint-Germain’s £16.8 million asking price for the 32-year-old.

Cavani’s agent reportedly told the Daily Mirror that no amount of money offered by Chelsea or Manchester United would have been enough for him to leave PSG.

Although Chelsea missed out on Cavani, manager Frank Lampard is reportedly eager to make other moves in the summer. The Daily Express says Lampard is on the lookout for a new goalkeeper in the summer following 25-year-old Spain goalkeeper Kepa Arrizabalaga‘s recent poor run of form.

The Daily Mirror is also reporting that Arsenal midfielder Mesut Ozil had a deadline day move to Qatar blocked by the club – despite the transfer being approved by manager Mikel Arteta.

England and Borussia Dortmund forward Jadon Sancho is high on Liverpool’s summer wishlist, according to the Daily Express.

Boubakary Soumare: The Lille midfielder rejected a January offer from Newcastle in the hopes of securing a move to Liverpool, according to French website Le10sport.

Willian: The Brazilian winger would favour a new contract with Chelsea over the chance to join Barcelona, ESPN says.