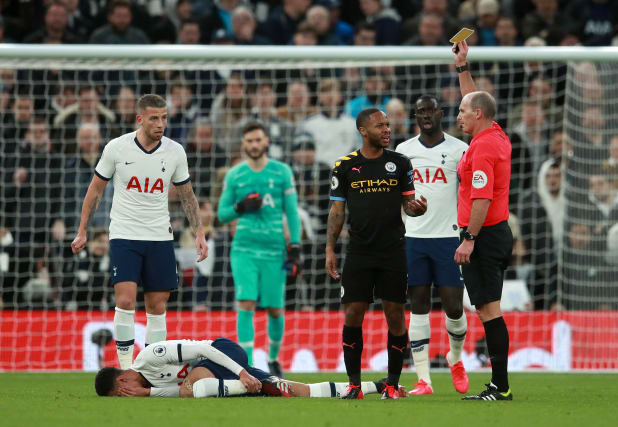 Sterling was lucky to avoid a red card in Spurs’ 2-0 win over City on Sunday when he went in studs-up on his England team-mate and caught him above the ankle.

Referee Mike Dean only awarded a yellow card and VAR did not overrule him.

Alli initially played on as Spurs won the game through goals from debutant Steven Bergwijn and Son Heung-min before limping off in the final 10 minutes.

The 23-year-old is an early doubt for Wednesday’s FA Cup replay against Southampton, but is still mates with Sterling.

“We will see how it is on Monday, but hopefully it is not too bad,” Alli said of the injury.

“I am not sure if it was a red to be honest, I have not had a proper look back at it, it is obviously for the referee and VAR to make the decision. They didn’t give the red card.

“We were just chatting, he is not in the best of moods, he is a winner so it was difficult. We haven’t seen each other for a while so it was nice to have a catch up.

“We were speaking about it at half-time and we are good friends. I know what sort of player Raheem is and he would never intentionally try to hurt someone.

“There are no hard feelings, he is a fantastic player and we move on.”

Alli opened up on the exit of Christian Eriksen, who joined Inter Milan last week, ending a six-year stay at Tottenham.

The pair formed a potent partnership as Spurs established themselves at the top table of English football and Alli is sad they have been separated.

“Chris is an amazing player, but it came to that point where he wanted to move on,” he said.

“It was sad for me and the other boys because he got on with everyone, he was a great squad player, he got on well, he was great in training and always working hard on the pitch.

“He gave me a lot of assists as well and I am going to miss them, but at the same time I wish him all the best and I am sure we will speak soon, maybe go for dinner.”

The last six months of the Denmark international’s time at Spurs were ruined by speculation over his future, to the point where he was booed by his own fans.

The supporters questioned his commitment after a string of below-par performances, but Alli insists he was the ultimate professional.

“He’s been amazing,” he added. “You don’t want to speak to him too much about what is going on but he has been giving 100 per cent, always been training hard, always been committed to the club, you read a lot and see a lot but you would never be able to tell that he wasn’t focused.

“He was always positive and never really spoke about anything other than Tottenham. It is a huge honour to have played with him and I wish him all the best.”

City suffered a sixth Premier League defeat of the campaign but it could have been different had they taken a plethora of chances, not least Ilkay Gundogan’s first-half penalty.

Fernandinho, who made his 300th appearance for City, told the club’s official website: “We played the same way we’ve played this season by creating chances but at the end the result was not the one we wanted.

“Now we need to stick together as a squad. We created chances especially in the first half where we hit the post and in the second half we hit the bar. We also missed a penalty so it was a strange game.

“We had a chance to score at least three goals but we have to accept it. We have to get back to training and improve.”