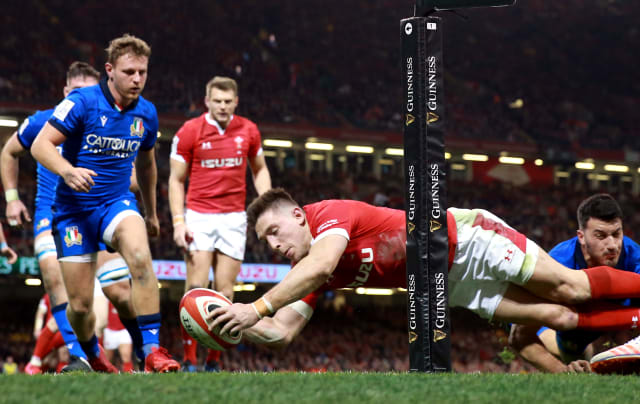 Adams’ hat-trick of tries against Italy was Wales’ first Five or Six Nations treble on home soil since Maurice Richards scored four in a 30-9 victory over England 51 years ago.

And just 22 games into his Test career, he is closing in on a place among Wales’ all-time top 10 try-scorers, with the likes of 1970s greats Sir Gareth Edwards and Gerald Davies just six touchdowns ahead of him.

“The confidence he is playing with, when you are playing that well the ball just seems to find you as well,” Wales fly-half Biggar said.

“He is an out-and-out finisher, and he has been great for us since coming in.

“If he was in a New Zealand shirt or something like that he would be getting even more praise, probably, because his record is fantastic.”

Adams will be an integral part of Wales’ bid to post a record ninth successive Six Nations win by toppling Ireland in Dublin next Saturday.

Ireland were the last team to defeat Wales on the Six Nations stage, beating them 37-27 in February 2018.

And while the defending Grand Slam champions are off and running in pursuit of another Six Nations title, Ireland will present an imposing early barrier.

Biggar added: “It (Aviva Stadium) is a very difficult place to play. Their record there speaks for itself – they are very tough to beat.

“We know how difficult winning there is. We have done it before, but have come up short in the last few years.

“It is about making sure we go there and keep our error-count down as much as possible. They thrive off errors and kick field position.

“When they get into the 22, they are good at converting it into points. We know that we have to play a bit better and front up.

“What is important for us is that we have started the campaign really well, and it is about building that momentum.

“We are fully aware that going out to Ireland is going to be a little bit more of a challenge.

“That is not taking anything away from Italy – they came with a lot of physicality. Next weekend is going to be a completely different challenge.

“We know how aggressive their defence is going to be in terms of their line-speed and competing at pretty much every ruck, the same as we do.

“As much as we probably want to play as much rugby as possible, next weekend is probably when you have to roll your sleeves up away from home, especially when your two away games are in Dublin and at Twickenham.”

Head coach Wayne Pivac should have centre Owen Watkin, scrum-half Gareth Davies and hooker Elliot Dee back in the selection mix following their recovery from injuries.

But Pivac’s biggest selection debate is likely to be in midfield after Saracens centre Nick Tompkins presented a powerful case to start with an outstanding try-scoring performance off the bench against Italy.