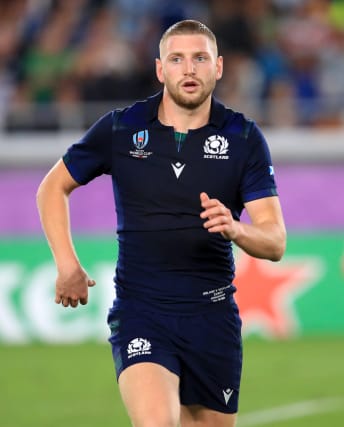 Scotland omitted Finn Russell from their squad to face England as they look to maintain “cohesion” ahead of their second Guinness Six Nations game.

But head coach Gregor Townsend remains in talks with the sidelined Racing 92 fly-half.

Adam Hastings is set to continue in the number 10 jersey for Saturday’s BT Murrayfield encounter, while Duncan Weir is also in the 37-man squad.

Russell left the squad nine days before Saturday’s opening defeat by Ireland after being told he would not play in Dublin after missing training following an alleged drinking session at the team hotel.

Defence coach Steve Tandy said: “I think Gregor is in dialogue with Finn but I know through this period we have been after cohesion and as many players to do as many training sessions as we can.”

When asked whether Russell would feature later in the tournament, Tandy said: “I have no idea. That’s as much as I know and as defence coach I think I have enough to deal with. It’s more about getting our systems up and running. I will leave that to the boss.”

The Welshman feels togetherness is crucial as he introduces new patterns of defence play to the squad.

“The boys have been great,” he said. “Having probably about six sessions to do it, it’s been really exciting but the way the boys have bought into it and been asking questions, their appetite to learn and been stimulated in a slightly different way, they have been a pleasure to work with.

“It’s a slightly different philosophy but the boys are good defenders so it’s not like you are starting from scratch.

“I feel really lucky to be part of this group and seeing how tight it is over the last few weeks has been really good.”

The former Ospreys head coach, who was appointed in late December, said: “I am new to international rugby and it’s been awesome to see the way the boys have really connected.

“The majority of the group have trained nearly every session. It’s been hard for some of the exiles to miss two or three sessions but that’s part of international rugby. Having a large group together constantly has been a real benefit, and having most do the full six or seven sessions has been of real importance.

“Obviously we didn’t get the result in Ireland but a lot of the performance is down to having cohesion and being a tight group. You can see the way they were interacting in Spain, they look a really tight group.”

Lock Jonny Gray hopes to see his former Glasgow team-mate back in the squad.

“I don’t know too much about the situation,” Gray said. “All I know is that everyone cares about Finn here and hopefully it sorts itself out.”

Gray was still hurting from Saturday’s 19-12 defeat after Scotland failed to make the most of a series of chances, the most blatant when captain Stuart Hogg spilled the ball while attempting to touch down.

“It’s still pretty raw,” the 25-year-old said. “All credit to Ireland, they ground out the win and deserved it, but it’s frustrating from our end not to take our opportunities. It hurts to lose.

“It was tough watching the review, just how gutted we were that we didn’t take those opportunities. There were a lot of positives but we know we have to do better in those areas, and conceding penalties and turnovers as well.”

Scotland will again be without wing Darcy Graham, who remains sidelined due to a knee injury.