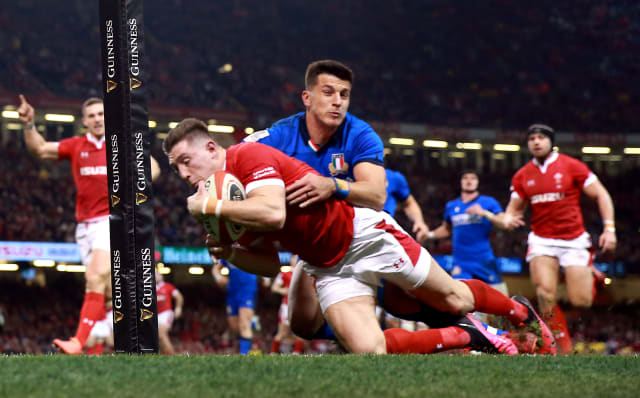 The Guinness Six Nations is off and running, with Wales, Ireland and France opening their campaigns by claiming home wins.

Here, the PA news agency looks at five things we learned from the opening weekend.

Shaun Edwards has transformed France’s defence and mindset in rapid time. His first game as Les Bleus defence coach delivered a 24-17 victory over England, and had it not been for Jonny May’s masterclass in finishing, they would have kept the pre-tournament favourites and 2019 World Cup finalists try-less. The French players tackled like men possessed, showing defensive organisation and commitment that had often previously been lacking. Edwards earned plenty of plaudits during his long spell with Wales, and that magic has crossed the Channel.

May and Adams racing ahead as Lions Test wings

A lot of water will pass under the bridge before British and Irish Lions head coach Warren Gatland announces his 2021 tour squad for South Africa, but – form and fitness permitting – England speedster May and Wales flyer Josh Adams look nailed-on Test starters. Both made dazzling impacts on the opening weekend, with May scoring two tries during England’s defeat against France and Adams claiming Wales’ first Five/Six Nations hat-trick in a home game since 1969 as Italy were thumped 42-0. Between them, May and Adams have scored 43 tries in 75 Tests. It is some strike force that awaits Gatland.

England were comprehensively beaten in their Six Nations opener against France in Paris and looked lost at times. Having seen influential number eight Billy Vunipola sidelined by injury, head coach Eddie Jones selected flanker Tom Curry as his replacement and fielded lock Courtney Lawes in the back row, but it did not work. Jones, whose team tackle Scotland at Murrayfield next Saturday, will also need to look at other areas, such as potential starts for prop Ellis Genge and hooker Luke Cowan-Dickie, who helped transform England’s scrum when they arrived off the bench, while scrum-half remains an acute problem position. In short, Jones has some serious thinking to do.

Tompkins a centre of attention that England missed

Saracens centre Nick Tompkins played for England Under-20s and England Saxons, but it was in the red shirt of Wales that he made his senior Test debut. And it was an international bow to savour, with the 24-year-old scoring a brilliant solo try after coming on as a second-half substitute against Italy and making strong claims to start in next Saturday’s Dublin appointment with Ireland. Tompkins qualifies for Wales through his Wrexham-born grandmother, and he took his chance in spectacular fashion. England fans must be wondering how he slipped through the net.

Italy on course for another wooden spoon

Italy have finished bottom of the Six Nations Championship 14 times and their last victory in the tournament was against Scotland five years ago, since when they have lost 23 successive Tests in the competition. A caning from Wales was perhaps expected by many, and it would have been even worse than a 42-point defeat had Wayne Pivac’s men taken all their chances. And what is next for the Azzurri? Resurgent France in Paris next Sunday, when another landslide defeat could await and Italy will once again find themselves on a prolonged damage-limitation exercise. The Six Nations promotion and relegation debate is not going away.