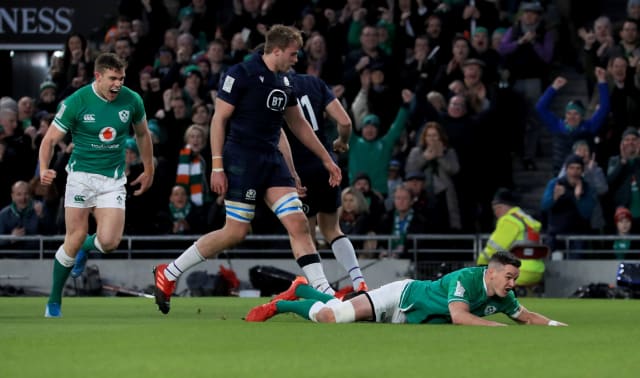 Johnny Sexton admits Ireland have lessons to learn following an unconvincing win over Scotland but insists being “alive” in the Guinness Six Nations is the most important thing.

Fly-half Sexton ensured the Andy Farrell era got off to a winning start by scoring all of his side’s points in a nervy 19-12 success in Dublin.

Unfancied Scotland arrived at the Arriva Stadium as heavy underdogs but came close to springing an upset, with Stuart Hogg culpable of a dreadful fumble which cost the visitors a second-half try.

Having been crowned Grand Slam champions in 2018, Ireland failed to mount a title defence last year after losing their opening match to England.

With that disappointment in mind, captain Sexton is currently content to grind out points to keep the team in contention for the championship while they adapt to the style of new head coach Farrell.

“Last year we had the England game here, Triple Crown gone, Grand Slam gone, uphill battle to try and even win a championship,” he said.

“So we’re alive and everything and that’s where we want to be. It’s always difficult to come together and to have a perfect game but I thought we showed glimpses of what we could do. Lots of lessons in there for us to learn and get better from.”

Sexton, who scored and converted the game’s only try, excelled on his first appearance since replacing the retired Rory Best as skipper.

His display was even more impressive given he only resumed full training last week after suffering knee damage in early December playing for Leinster.

While Sexton admitted to feeling “rusty”, coach Farrell hailed the 34-year-old’s desire to return and subsequent display as a “magnificent effort”.

Farrell said: “For him not to touch a ball and not to fight in anger until probably Thursday of this week, that says it all about the man, doesn’t it really?

“To have the pressures of doing something he passionately wanted to do, to lead his country for the first time, and all of those new bits that come in around that and then deal with coming back from such an injury and leading the side like he did, hats off to Johnny, that’s a magnificent effort.”

Ireland, who host reigning Grand Slam champions Wales next weekend, lost a trio of players to injury on Saturday.

Farrell expects debutant Caelan Doris and replacement prop Dave Kilcoyne to quickly recover from head knocks, while outside centre Garry Ringrose was due to have a scan on a hand issue.

The 44-year-old former England international, who assisted previous Ireland head coach Joe Schmidt, played down the significance of his first match in charge and is satisfied to have gained some momentum ahead of the visit of Wayne Pivac’s men.

“It’s nothing to do with my first game or whatever, I’m just pleased. In this competition we all know what it’s about and you need to get off to a winning start to try and roll on,” he said.