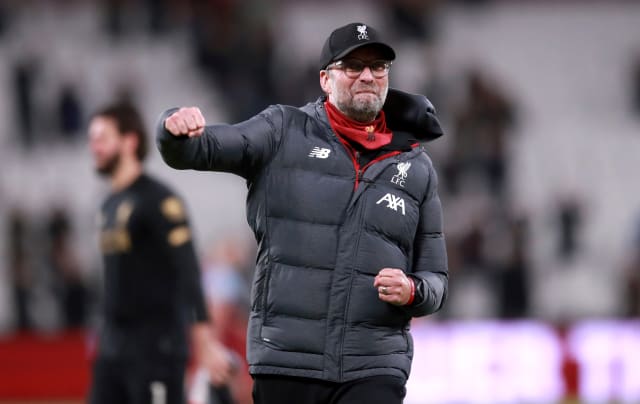 Manager Jurgen Klopp insists Liverpool’s incredible numbers mean nothing to him or his team as they remain focused on ticking off the individual victories which will bring a long-awaited title back to Anfield.

An impressive second half saw his side beat Southampton 4-0 to make it 100 points from the last 102 available and 20 successive home league wins with an unbeaten Premier League run extending to 395 days.

They set another top-flight record by finishing Saturday 22 points ahead of second-placed Manchester City, the biggest gap in history at the end of a day.

The only other team to have 20 or more point lead since 1888 was Manchester City (over Manchester United) in May 2018 and it lasted 24 hours and stayed at 19 points for what little remained of the season.

Liverpool set their mark on February 1 after racking up 24 wins and one draw in their opening 25 matches and need just seven more wins to guarantee a first domestic championship in 30 years.

But facts and figures, records and history, do not matter to Klopp. For him it is only about the next match – which in the league is against Norwich on February 15 as they now go into their maiden mid-season break.

“We don’t look at that number, that’s true. The game we lost (prior to the unbeaten) period was at Manchester City,” said the Reds boss, referring to their only Premier League loss (in January 2019) since May 2018.

“We could say we lost it because of 11 millimetres (how far goalline technology ruled Sadio Mane’s shot was from wholly crossing the line) or whatever.

“It was a really tight game, so imagine if we would have drawn that day and then I don’t know what the number would be then of how many games we didn’t lose or whatever.

“I promise you I don’t lie: we don’t feel it. We just don’t feel it. It doesn’t feel a second like it’s really special, it just feels the hardest work.

“That’s why I am so happy the boys can go now for a week somewhere else, do what they have to do to come back recharged, refreshed. Then we prepare for Norwich and the rest of the season.

“That’s the only thing I know and all the rest we have to see. So many things can happen in football.

Liverpool were made to work hard during the opening 45 minutes against Southampton, who probably should have been ahead at the break considering the number of chances they created.

But when none of them went in it was only a matter of time before Klopp’s red machine kicked into gear and after ex-Liverpool striker Danny Ings was denied a penalty at one end Alex Oxlade-Chamberlain, also against his former club, scored immediately at the other.

Jordan Henderson fired home a second to give them breathing space and Mohamed Salah’s double in the final 20 minutes put the gloss on a sparkling second-half showing.

Despite the scoreline Southampton boss Ralph Hassenhuttl was pleased with his side’s performance.

“I enjoyed every minute from my team. I wanted them to do what they did. When you concede four goals it is a bit too high but so what?” he said.

“A deserved win for the opponent. At the end it shows how strong they are. They played on Wednesday evening yet they are still focused. There is not one moment you think they underestimate you.”