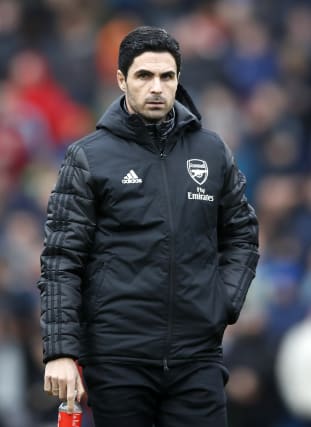 Mikel Arteta took a bizarre swipe at the playing conditions after watching Arsenal struggle to cling on for a goalless draw against Burnley at Turf Moor.

The Gunners were distinctly second best for much of the match with Jay Rodriguez coming closest to breaking the deadlock for the hosts when he rammed his second-half strike against the underside of the bar.

Despite the continued overcast weather in the north-west, Arteta insisted the long grass and a dry pitch had played a crucial role in preventing his side playing their normal game.

Indicating a couple of inches, Arteta insisted: “The conditions were difficult – the grass was this long and they didn’t put any water on it, and that’s not a very helpful thing to play football.

“I didn’t water the pitch yesterday at the training ground because I expected it, but that doesn’t make it any easier to play.

“They (Burnley) do what they do really well, and you are allowed to do it so we have to react to that.

“In some moments it wasn’t the grass – it was their quality and what they do really well, and we could not do it in the right way.”

The draw left the Gunners without a Premier League win since New Year’s Day and Arteta was scathing of some aspects of his side’s display, conditions aside.

He added: “I was very disappointed with the way we started the second half. For the first 20 minutes we couldn’t control any aspect of the game, and we were lucky not to concede a goal.

“We need more consistency. We were fantastic in some moments but we were so sloppy and we put ourselves in big trouble with a lot of unnecessary situations.”

Burnley boss Sean Dyche refused to be too downhearted at missing out on all three points as his side extended their current run to three games unbeaten in the top-flight.

Dyche reverted to the same side that won at Old Trafford last month and believed his team once again proved their ability to combat the Premier League’s top outfits.

Dyche said: “When you come away having played like that against a top side there’s an edge to your thinking that you should have won.

“But it’s another clean sheet and another point to make it seven from three games available, and it continually shows that the players are ready for the challenge.

“We defended well and I was pleased with the tactical set-up. I thought we asked enough questions of them and I felt the only thing missing was a goal.”

Crucially for Dyche, the point was another one in the right direction after a previous run of four consecutive defeats which had begun to raise big questions about their top-flight status.

Dyche added: “I’m a realist and I know there are a lot of very tough challenges in the Premier league.

“On the back of losing four in a row a lot of people wondered, and I’m pleased to say we focus on the facts, not the perception. We have worked hard to turn the key moments in a game our way.”