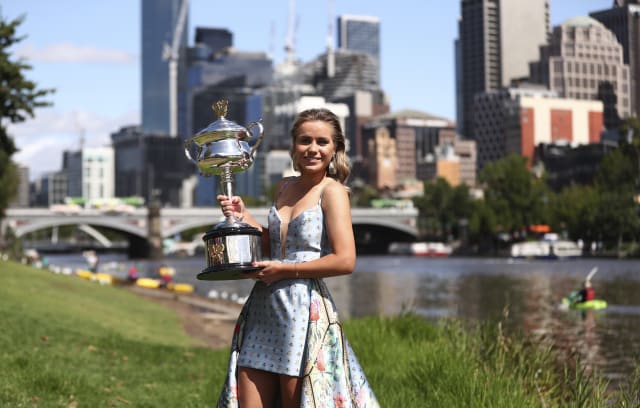 Watching Naomi Osaka and Bianca Andreescu win grand slam titles persuaded Sofia Kenin that she did not need to wait for her big breakthrough.

The 21-year-old American came from a set down to defeat Garbine Muguruza and lift the Australian Open trophy in her first slam final.

Kenin’s victory means five of the last six slam titles have been won by women aged 23 and under, all of whom seized their big moment with relish.

She said: “Definitely it was a motivation and my dad was telling me it was great for them and you can really achieve this, such a young age that they achieved it.

“My dad said just play and fight for every match that you’re playing and anything is possible. The deeper you go, anything can happen.”

Kenin’s dad Alex has been her coach since she first picked up a racket as a pre-schooler after the family moved from Russia to New York.

When asked at what age he first thought his daughter could win a grand slam title, he replied, only half-jokingly: “Three and a half”.

“People were looking at her and they did see something very special,” said Kenin Sr, who drove cars in New York and studied computer science to give his young family a better life.

“It’s a long journey and you’re just doing it and you have a belief and in reality you have very little chance that it’s going to happen. There’s so many things have to fall into place and you only can hope and try to put them in place. That happened and I’m very happy.”

Videos have surfaced this week of interviews with Kenin aged six and seven, talking about trying to return Andy Roddick’s serve and being shown around the Miami Open by Kim Clijsters.

“I was a baby when I arrived in New York so I don’t really remember much but I started off with tennis because I wasn’t into into other toys, I just liked to play with balls and with a racket,” she said.

“My dad said let’s go try and play. I had great hand-eye co-ordination. I saw I was really different to other players and people said she’s really special, something about her.”

Kenin is the latest American-raised player with Russian roots to reach the top of the game, and she has talked about being inspired by Maria Sharapova.

There is a steeliness and grit to the American that is certainly reminiscent of the five-time grand slam champion.

Speaking about his daughter’s Russian heritage ahead of the final, Kenin Sr said: “The root is very tough, tough and bitter. What’s around it is decoration. There is something inside.”

After losing the first set to Muguruza, Kenin redoubled her efforts early in the second, urging herself on and often appearing more angry after winning big points than losing them.

The crucial moment in the match came in the fifth game of the third set, with Kenin seemingly in big trouble at 0-40.

The 21-year-old responded in astonishing fashion, pulling off four clean winners and an ace to hold serve. Muguruza did not win another game.

Even her father was surprised by the poise and nervelessness she showed on the biggest stage of her life.

“She hates to lose,” he said. “It’s just not an option. She came up with all the goods, which is unbelievable, even for me. She fought so hard. This girl was much bigger, much more powerful, she’s playing great tennis, but Sofia refuses to lose.”

On Monday, Kenin will climb to seventh in the rankings, making her the leading American ahead of Serena Williams and the second youngest in the top 10 behind Andreescu.

Seven-time slam champion Mats Wilander expects her to challenge for many more titles.

“I think that she is so intense walking and in between points,” said the Swede on Eurosport.

“But, if you look at the point construction, they’re not panicky, they’re not crazy. The way she hits the ball, she’s very smooth, very fluid, very compact. The personality that she shows doesn’t fit with the player. It’s very unusual.

“She’s really clever. She can only improve physically; she can get a little stronger, a little quicker. She can improve the serve for sure. So, I say, watch out. This lady is not going to beat herself in very many matches.”