Ansu Fati scores a brace in Barcelona’s win over Levante 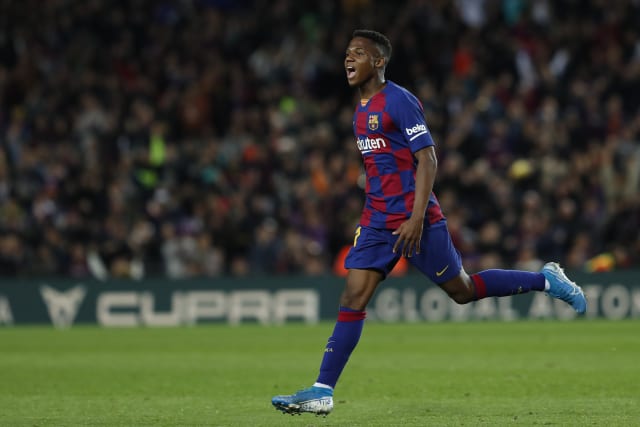 Fati’s quick-fire double helped Setin’s side to a 2-1 victory at the Nou Camp on Sunday night as the reigning champions moved back to within three points of LaLiga leaders Real Madrid.

Lionel Messi was the architect of both goals. A superb defence-splitting pass by Messi sent the 17-year-old through on goal. He brushed off the challenge of Jorge Miramon before stroking the ball into the net.

Two minutes later the combination was repeated. Messi’s probing run into the box and lay-off for Fati to score again with a strike from a tight angle, with the forward becoming the youngest player to score two goals in one LaLiga game.

“He is a kid, he is growing,” said Setin via a tv interview on the club’s official website.

“We know he has a lot of talent and we will try to help him in his growth and to improve. We need to go step by step.

“Of course he is young and he needs to improve a lot of things but at the same time he scored two goals tonight and he worked an awful lot.”

Fati now has five goals in what is his breakthrough season at Barcelona, he said: “It’s a dream come true and I am trying to enjoy every minute.

“I always say the same, I will try to do my best and then we will see what happens. The most important thing is to try to help the team.

“We perhaps should have scored more goals but the most important thing is we won, so we are happy. We are going in a good direction.”

Setin echoed his young forward’s sentiments that they should have scored more than twice.

Messi missed a couple of good opportunities, by his standards, to open the scoring before turning provider for Fati, while Antoine Griezmann was also guilty of spurning a couple of good chances.

Levante created a handful of scoring opportunities in the second half but were unable to score the goal that might have made Barcelona nervy until injury time.

Setin said: “We have had two games this week and two wins. Tonight we let up a bit in the final part of the game and let in a goal, they had chances.

“We played really well in the first 45 minutes. I think we should have scored more goals. We had a lot of chances, we scored two goals but we could have had many more.

“We played really well from the back and Levante were aggressive, pressing us really high from the front. It was tough.”

McAllister: Win over Braga will boost confidence in Rangers squad