Sexton scores every point for Ireland in tense victory over Scotland 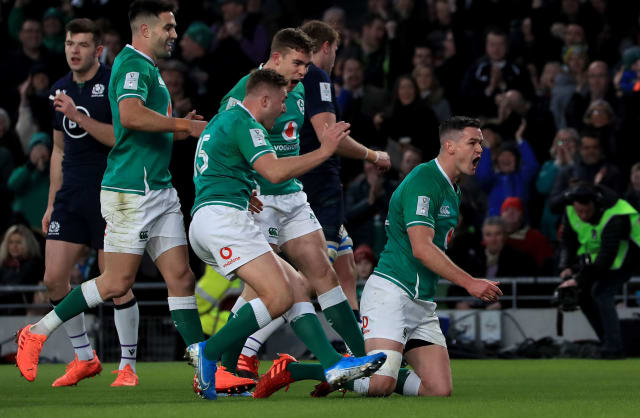 Johnny Sexton starred on his first outing as permanent Ireland captain as Andy Farrell’s tenure as head coach began with an unconvincing 19-12 victory over Scotland.

Saturday’s match was far from the one-sided encounter many predicted and the outcome could have been completely different had new Scotland skipper Stuart Hogg not cost his side a second-half score with a bizarre fumble.

Adam Hastings, in at stand-off for the Scots owing to the ill-discipline of star man Finn Russell, kept Gregor Townsend’s visitors in contention until the final whistle with four penalties of his own.

But, despite a largely positive display, the unfancied visitors paid for their lack of clinical edge as their abysmal away record in this competition continued.

Meanwhile, Farrell, who stepped up to replace Joe Schmidt after the World Cup, has plenty to ponder following a disjointed performance which was compounded by debutant Caelan Dorris leaving the field injured inside five minutes.

Scotland arrived at the Arriva Stadium as rank outsiders, priced at 7/1 for victory with some bookmakers, and on the back of dismal trip to Japan at the back end of last year.

Townsend’s men flew out of the traps looking like a team with a point to prove and were rewarded for their fast tempo by an early lead as Hastings kicked a straightforward penalty.

Ireland, meanwhile, were forced into a premature reshuffle as the maiden Test appearance of 21-year-old Doris was agonisingly cut short, with the experienced Peter O’Mahony brought on his place.

The hosts quickly regrouped and conjured up a slick opening try in the 10th minute.

After attempting to bulldoze over the line, quick ball from a resultant ruck culminated in skipper Sexton crossing unchallenged after a neat pass from Murray, and then converting his own score from wide on the left.

It was a special moment for Dubliner Sexton, appointed skipper at the age of 34-year-old following the retirement of Rory Best and cheered on from the stands by his family.

Russell’s notable absence at number 10 had afforded Hastings’ opportunity in that role.

The 23-year-old son of Scotland great Gavin Hastings converted a far more difficult penalty from wide on the left to quickly reduce the deficit to a single point, but was later off target moments after Hogg escaped punishment for a late tackle on Jordan Larmour.

Scotland almost went ahead in the closing stages of a breathless first half after Huw Jones intercepted a slack pass from Murray inside his own 22 and raced away.

The ball was eventually worked to Sean Maitland but, with the try line in sight, a superb last-ditch tackle from Iain Henderson brought the breakaway to an end, leaving Murray to breathe a sigh of relief and the home side 10-6 in front at the break following Sexton’s first penalty.

Scotland played the better of the rugby in the opening period of the second half and repeatedly came within striking distance of the Irish line before coughing up possession.

They were punished further for their profligacy minutes into the second period when fly-half Sexton added another three points, before a calamitous error from Hogg cost them a 50th-minute try.

Full-back Hogg was left with a simple finish in the left corner but somehow dropped the ball before grounding, a costly error initially missed by the on-field officials but picked up by the TMO.

Scotland had to settle for just three points as Hastings subsequently kicked another penalty after Ireland were penalised for not rolling away.

Ireland obliterated their opponents during their World Cup opener just over four months ago but this was a far more competitive affair.

Appearances off the bench for in-form John Cooney, who had challenged Murray for the number nine jersey, World Cup absentee Devin Toner and debutant Ronan Kelleher each brought rapturous receptions from the home crowd.

Ireland produced some staunch defending on their own try line in the final few minutes to prevent Scotland potentially snatching a draw, after a couple more Sexton penalties – either side of one from Hastings – moved the scoreboard to 19-12.

The failure to break through from close range left Scotland to rue another fruitless away trip.

Aside from a handful of victories against perennial wooden spoon winners Italy in Rome, the Scots remain without an away success in this competition since a 23-20 win at Croke Park a decade ago.