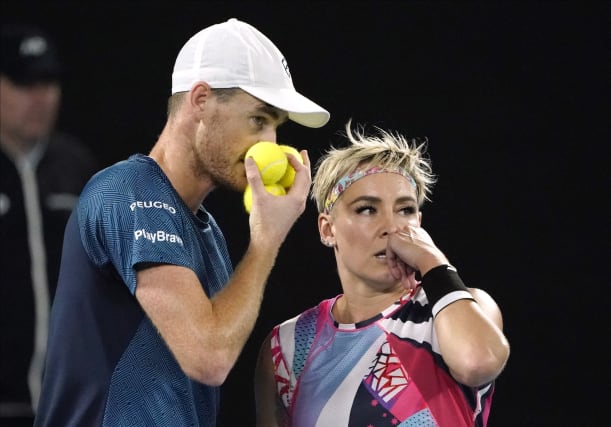 Jamie Murray came up just short in his bid to win an eighth grand slam title at the Australian Open.

The Scot teamed up with American Bethanie Mattek-Sands in the mixed doubles, with the pair hoping to win a second straight major title after lifting the trophy at the US Open last September.

They won the opening set against Czech Barbora Krejcikova and Croatia’s Nikola Mektic but the fifth seeds fought back to win 5-7 6-4 10-1.

Murray and Mattek-Sands made an inauspicious start, with the Scot dropping his serve in the first game.

It stayed that way until Mektic served for the set at 5-4 and sent down a double fault on the deciding point.

Murray and Mattek-Sands seized their second opportunity with relish, breaking Krejcikova’s serve to take the set as Mattek-Sands threaded a backhand on the line.

It was the Murray serve that proved vulnerable again in the fifth game of the second set, although the British-American pair could count themselves unlucky as the ball kicked up off the net cord and made life difficult on the volley for Mattek-Sands.

The American’s serve was then broken and, although Murray and Mattek-Sands retrieved one of the breaks, Krejcikova and Mektic pushed the match into a deciding tie-break.

That proved to be one-way traffic as the Czech-Croatian duo won the final eight points.