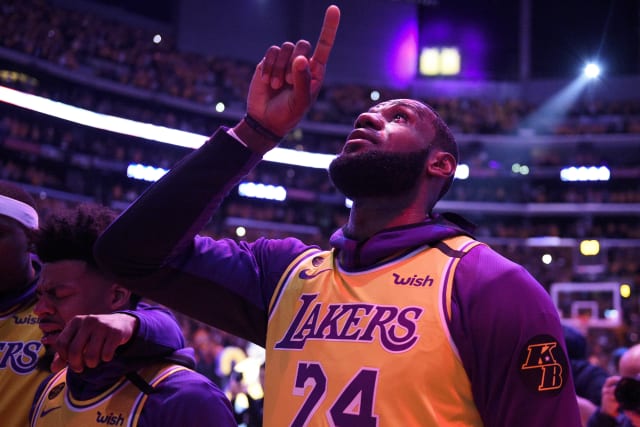 The Mamba Mentality was alive and well at Staples Centre as the Los Angeles Lakers paid tribute to former player Kobe Bryant and his daughter Gianna before Friday’s game against the Portland Trail Blazers.

Thousands of fans paid their respects outside the stadium amid a sea of purple and gold, while players wiped away tears on the court.

The tribute began with each member of the Lakers lineup introduced as “number eight, Kobe Bryant”, before R&B artist Usher sang Amazing Grace in front of number eight and number 24 yellow rose arrangements.

This was followed by a video of Bryant talking about his life and career and a powerful rendition of the national anthem, performed by hip hop group Boyz II Men.

The pre-game ceremony concluded with a speech from Lakers forward LeBron James.

“I look at this as a celebration tonight,” he said.

“The first thing that comes to mind is all about family. As I look around this arena, we’re all breathing, hurt and heartbroken. The best thing you can do is lean on the shoulders of your family.

“Kobe is a brother to me. The one thing we always shared was that determination to just want to win.

“I want to continue his legacy, not just this year, but as long as we continue to play basketball.”

The game itself saw Damian Lillard guide Portland to a 127-119 victory with an inspired performance.

Lillard finished with 48 points and 10 assists while Anthony Davis top-scored for the Lakers with 37.