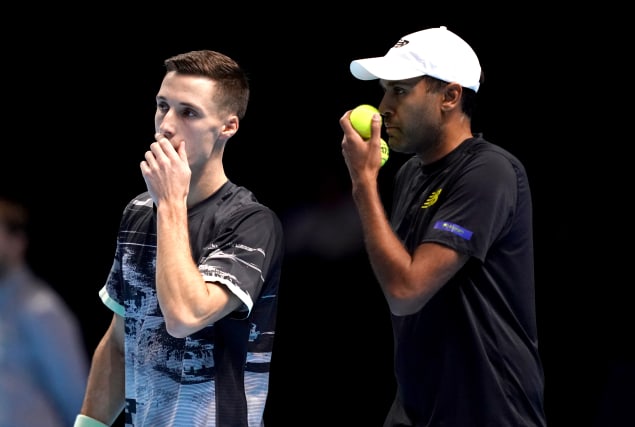 Joe Salisbury will bid to join the ranks of British grand slam champions when he and American Rajeev Ram contest the men’s doubles final at the Australian Open on Sunday.

The 27-year-old Londoner has enjoyed a rapid rise since a shock run to the semi-finals at Wimbledon in 2018 with Dane Freddie Nielsen.

Salisbury and Ram reached five ATP Tour finals last year, winning two of them, and reached at least the third round of all the slams, earning them a place at the ATP Finals in London in November.

Salisbury will break into the world’s top 10 whatever the outcome of Sunday’s clash with Australian duo Max Purcell and Luke Saville, and would go up to number four with victory.

But the main goal is the trophy, and they will go in as favourites against the home wild cards, who are on a 12-match winning streak having won their last two tournaments on the second-tier Challenger Tour.

Salisbury said: “They are playing really well. They have beaten some top teams here.

“We will do our homework, look at their matches and see what they do well. I guess we will probably be going into it as the favourites but, while we are on paper the seeded team, we won’t be taking it lightly.”

Salisbury and Ram are both understated characters and Canadian coach Louis Cayer, who is largely responsible for Britain’s strong record in men’s doubles over the last decade, has been working hard to bring them out of their shells on court.

He said: “They have made a commitment to stay together as a team and to have high positive energy regardless of what happens  I think we have helped them to get to the right place as a team, so I knew they would be very dangerous this year.

“They play real classic doubles, which is old-fashioned, what I have been coaching on the tour for 33 years, the serve-and-volley game, the classic perfection in positioning to make people try tough shots and to beat themselves.

“They are good. They are solid. Not flashy. They don’t serve aces, they don’t return winners. They don’t throw points away.”

Salisbury has seen a big difference since adopting a more demonstrative and positive approach.

He said: “It’s a huge thing, and it’s something which maybe I didn’t appreciate as much earlier on in my career.

“We have learned to win matches when we are not playing our best. That’s so important for doing well at any tournament, especially the big ones.”

Jamie Murray was the last British player to win a men’s doubles title, picking up the Australian Open and US Open titles in 2016 alongside his former partner Bruno Soares.

Murray tends to dominate the British doubles conversation but Salisbury is clearly the current number one, and Cayer hopes he will get the recognition he deserves.

Cayer said of Salisbury and Ram: “They both love tennis, which helps. Some players play for the money. It is nice for me when I coach people who have a real love of the game.