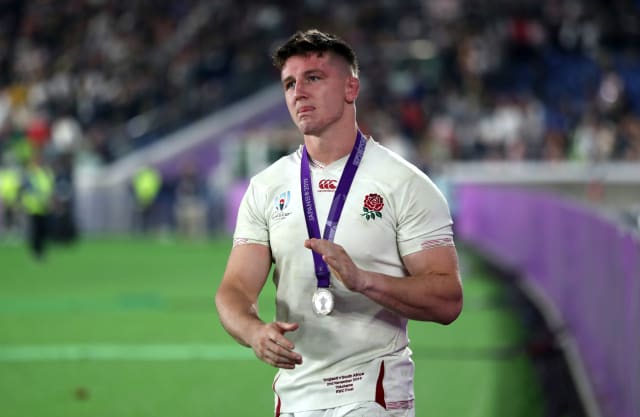 Tom Curry has taken tips from Billy Vunipola and David Pocock to ease his adjustment to number eight, but the England back row will still play to his own strengths.

Curry was one of the stars of last autumn’s World Cup, his ferocious defence and power in the carry identifying him as one of the game’s most potent flankers.

But Sunday’s Guinness Six Nations opener against France in Paris is his first start at number eight after Vunipola was ruled out of the tournament by a broken arm.

Curry has been chosen over Lewis Ludlam and Ben Earl to fill the void created by Vunipola’s absence and the 21-year-old has turned to his England team-mate and Australia great Pocock for guidance.

“I don’t think my game changes massively because of this. I want to stay true to myself,” the 2019 world player of the year nominee said.

“An eight will get into different positions to a six or seven so there might be a few more opportunities to carry and I may be in the backfield a bit more.

“I’ve analysed players, so how Pocock moved to eight, how Billy carries at eight.

“Billy’s work-rate and how he thinks about the game – I’ve analysed them and take things from them, but at the same time I want to do what I’m good at.

“As a team we need to go at France from zero to 80 and must be relentless. Every tackle, every carry, every clean-out has to be done with the fullest intent we have.”

For the first time since June 2018, England will enter a Test with a new face at full-back after George Furbank was given his debut for the Stade de France showdown.

Furbank’s promotion forces Elliot Daly on to the left wing, the position where he won the majority of his 42 caps until being moved to 15 in an experiment that appears to be over following the World Cup.

Furbank has flourished at Northampton this season after being given a roaming role by coach Chris Boyd and Jonny May, who lines up on the right wing, expects that form to translate to the international arena.

“I’ve been really impressed with George. He’s a young guy but is mature and he’s ready,” May said.

“He has a great appreciation for the game and has a bit of X-factor to his running game and skill set.

“He’s one of those players who looks like he’s got time on the ball. All the training we do is designed to put us under stress and fatigue to test our skill set.

“He always looks like he’s got time on the ball and that’s the trait of potentially a world-class player.”

France are playing their first match under new head coach Fabien Galthie and May insists they enter the new World Cup cycle as a force to be reckoned with.

“France have a dangerous backline. They have an offloading game, smart players, good decision-makers, attacking kickers,” May said.

“When they get on the front foot, the French are probably the best in the world at hitting gaps. They’re very dangerous so we’ll have to be at our best.

“They’re a difficult team to anticipate or predict because they can turn it on like that, they can be dangerous.

“I re-watched the World Cup quarter-final they played against Wales and they will have been pretty disappointed to lose that game.

“You can sense it’s a new era for them, a fresh start. The game is a sell-out and they’ll be flying out of the blocks.”