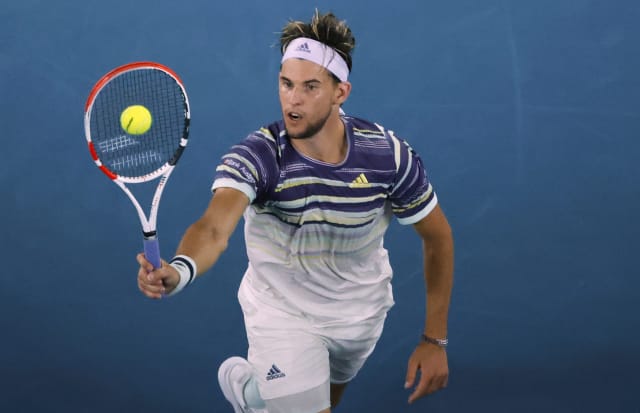 Dominic Thiem will put his all-court talents to the ultimate test against Novak Djokovic in the Australian Open final on Sunday.

Djokovic already stands alone among male players with his seven titles at Melbourne Park and he has never lost once he has reached the semi-final stage.

Thiem is already very familiar with the closed shop that Djokovic, Rafael Nadal and Roger Federer have made the grand slams having lost to Nadal in the French Open final for the last two years.

The 26-year-old Austrian had been thought of as a clay-court specialist but 2019 proved to be a breakthrough season on hard courts, with three of Thiem’s five titles coming on the surface.

The first of those was a victory over Federer in March in Indian Wells to give him a first Masters title, and he added trophies in Beijing and on home soil in Vienna before reaching the final of the ATP Finals in London.

Thiem said: “Indian Wells, that victory gave me so much relief and so much confidence. Then, last fall in Asia, then in the indoor season, I made this huge step forward.

“I really developed my game, I think, in the right direction. I got more aggressive on hard courts, started to serve smarter and to return better.

“That also gave me a lot of confidence for this new year and for Australia because I told myself, if I can be in the finals in London, why not as well in a hard-court slam?”

Thiem has certainly proved that point here, defeating Nadal in one of the matches of the tournament in the quarter-finals and then following up with victory over Alexander Zverev on Friday.

The German has been impressed by his friend’s evolution, saying: “He flattens his shot out much more. Before he was a complete clay-court player. A lot of movement, a lot of running around. Now he has a complete hard-court game. On hard court, he’s a much different and much better player.”

Thiem’s step up to the very top level has come since he split from long-time coach Gunter Bresnik and began to work with former Olympic champion Nicolas Massu.

The Chilean plays down the significance, though, saying: “All the credit is to him. Of course, for me it was a big motivation to try to help.

“When you arrive to a tournament like Indian Wells and you win, it helps you to believe that the work you are making is going in the right way.

Prior to the tournament, Thiem added countryman and former French Open champion Thomas Muster to his coaching team only to end the partnership halfway through.

Speculation has surrounded the circumstances behind the split, and Thiem’s father Wolfgang gave an insight.

He said: “After two weeks, Dominic said that it doesn’t fit together. He (Muster) had some good experience.

“Of course, he was a really good player. But, for me, the most important thing is that the coach understands what the player needs and not that the coach wants to make a copy of himself.”

While Djokovic goes in as the favourite, Thiem can take confidence from his recent record against the Serbian having beaten him in four of their last five meetings.

Those victories included the semi-finals of the French Open and at the ATP Finals, where both times it was Thiem who came through close battles.

“He definitely has the game,” said Djokovic. “He has the experience now. He has the strength. He has all the means to really be there. He has improved in the last 12 months playing on the hard court without a doubt, and the results are showing that.”

If Thiem does win, he will be the first new men’s grand slam champion since Marin Cilic lifted the US Open title in 2014.

Djokovic, Nadal and Federer are on a 12-tournament winning streak, while Marat Safin and Stan Wawrinka are the only other men to have won here since Federer’s first title in 2004.

After Daniil Medvedev pushed Nadal all the way in the US Open final, now it is Thiem’s turn to take on the old guard, and Djokovic knows they cannot hold back time forever.

“It’s inevitable it’s going to happen more frequently in the future,” he said.

“I’m going to try my best to prolong the domination in the grand slams as much as possible. I’m sure Roger and Rafa would agree. But it’s going to happen.

“Whether it’s this year we’re going to have a new grand slam champion or next year, but it’s very soon. It’s good for our sport. Of course we need more champions.”