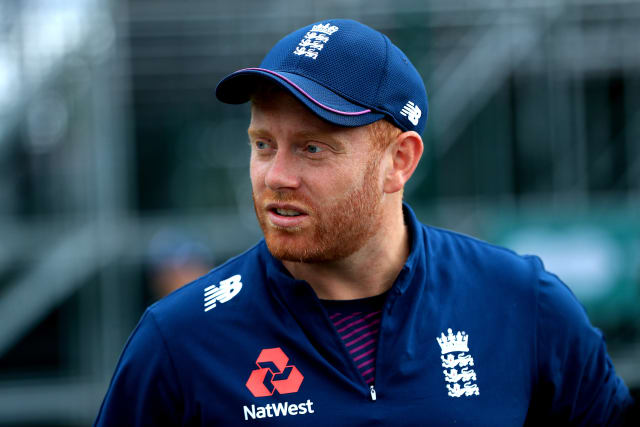 Jonny Bairstow made a blistering hundred and there were sizeable contributions from Joe Root and Joe Denly in England’s final practice match before the one-day international series against South Africa.

Bairstow was out in the first over against a South Africa Invitational XI at Paarl on Friday but, against the same opponents 24 hours later, he put them to the sword in a sparkling 100 from 83 balls before promptly retiring out.

Test captain Root contributed a more measured 91 following a golden duck the day before, while Denly went through the gears after a watchful start to pummel 85 from 63 deliveries in England’s 340 for seven.

The warm-up match took a strange turn once the hosts had reached 103 for three after 20 overs, whereafter, following an agreement between the teams, they were left to chase 85 from 60 balls in a contrived finish.

England had won by 77 runs on Friday in their first 50-over match since winning the World Cup and they were cruising again, so this was an attempt to create a pressurised environment.

The result was therefore largely irrelevant – their hosts chased down their notional target – but ahead of Tuesday’s first ODI in Cape Town, there were a number of pleasing outcomes, namely Bairstow’s return to form.

Bairstow has endured a miserable past few months and was dropped for the final three Tests against the Proteas amid a sequence of dwindling returns in the format, but he remains first-choice in England’s 50-over side.

A day after regular opening partner Jason Roy had amassed a ton against a team of players who were overlooked for the South African domestic one-day competition, Bairstow settled into his stride with a some crisp off-side drives.

Dawid Malan was unable to exert any pressure on the top order as he departed for a two-ball duck, having been given an opportunity because of Roy and captain Eoin Morgan dropping out of the batting line-up.

Bairstow was motoring along, going past his half-century from 35 balls with back-to-back sixes over midwicket off Justin Dill, whose fellow spinner Smangaliso Nhlebela was twice taken the distance by the England opener.

The Yorkshireman’s innings also contained 11 fours as he took the whip hand in a 157-run partnership alongside Root, only broken when Bairstow walked off after reaching three figures.

Root had only made one four in a 54-ball fifty full of industrious running between the wickets while there were brief fears when, at the non-striker’s end he was struck flush on the right hand by Joe Denly’s straight drive.

After receiving treatment on the field, Root smashed the next ball he faced for six but he was unable to follow Bairstow to a ton after missing a ramp and being bowled by Stephan Tait, who finished with four for 56.

Denly went through the gears after a circumspect start, hammering five fours and as many maximums after being dropped on 34 by a boundary rider, to take England beyond 300.

Tom Banton holed out for 23, as did a number of others, including Denly, with England slipping from 283 for three to 330 for seven, although their total seemed formidable at the scheduled halfway point.

Morgan was on the field at the start of the reply as England tinkered with their line-up, with Tom Curran’s slower ball making a breakthrough to bowl Jacques Snyman, who had put on 52 alongside Kabelo Sekhukhune.

Once Denly had claimed two wickets, a mutual decision was made whereby the home side were left with a reduced target, where Matt Parkinson dented their hopes with three wickets in the space of five balls.

But after Curran had been thumped for three successive fours by Beyers Swanepoel, Saqib Mahmood, playing for the first time following a bout of illness earlier in the week, yielded back-to-back sixes off a returning Snyman.

Mahmood conceded 22 from that over to leave the hosts requiring eight from 12 balls but that became four from four thanks to some excellent death bowling from Chris Jordan and Curran.

The hosts won with two balls to spare but the bizarre nature of the ending was underlined when Curran sent down his remaining two deliveries.