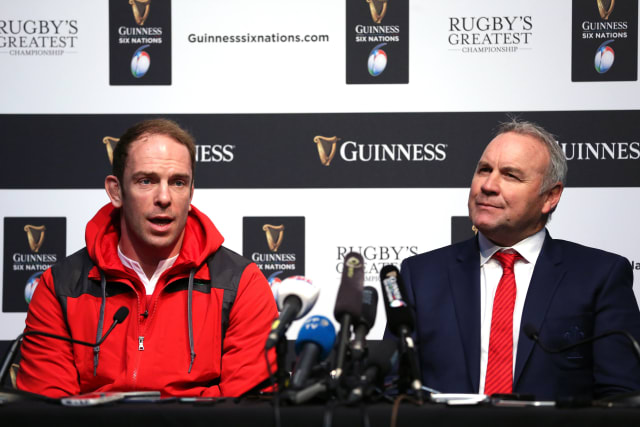 Alun Wyn Jones says Wales will not be looking back when they start Six Nations life under Wayne Pivac on Saturday.

The reigning Grand Slam champions begin a new era of their international history against Italy in Cardiff.

His fellow New Zealander Pivac is now at the helm, and although he had a trial run with a non-cap fixture against the Barbarians two months ago, the serious business is about to begin.

“Obviously, it was a long period that ‘Gats’ was here, and with the success he had,” Wales captain Jones said.

“But it’s the first one for Wayne, and I am conscious – and the group is conscious – that we are not going to look back.

“The new management is in situ, and the focus is on tomorrow and what is to come.

“Time will tell (how different it will be). We have had a few weeks together and we are all raring to get out here and see where we are.

“We had an influx of young players about 18 months to two years ago, and the experience and success is something we want to build on as a group with the new faces in the management as well.”

Only the injured trio of Jonathan Davies, Gareth Davies and Tomas Francis – plus number eight Ross Moriarty, who is on the bench this weekend – miss out following that 19-13 defeat.

So there is a considerable element of continuity, boosted by returning back-row star Taulupe Faletau, as Wales look to make an immediate impression under their new head coach.

Pivac said: “I am really looking forward to it. I’m excited to see the way the boys are working in and around the environment, and there is a good vibe around the place.

“They are working hard for each other, and that is exactly what we want.

“You do your homework. You get a rundown on the players that you are inheriting.

“To be honest, any surprises have been pleasant surprises. I am very happy with the entire group at the moment, and there are a lot of good conversations going on between the coaches and the players.”

Gatland injected an air of expectation among the Welsh public, elevating Wales into consistent performers on a global stage.

It makes him and his coaching staff a tough act to follow, but Pivac enjoyed considerable success with the Scarlets and he has assembled an outstanding Wales support group in Stephen Jones, Jonathan Humphreys, Byron Hayward and Neil Jenkins.

“The first thing is, we are no different. We are passionate about the game and we want to win,” added Pivac, whose two sons have travelled from New Zealand to watch his Six Nations bow.

“I am very conscious of focusing on how we want to play the game. It’s about making sure we prepare well and put on a performance that we as a group are proud of.

“If we can do that, then I am sure the spectators and everyone else will enjoy themselves.”

Asked if he will allow himself a moment on Saturday to let everything sink in, Pivac said: “It is business as usual, but it will be a special moment.

“I am sure I will enjoy it internally and I will have a smile on my face. It will be a very proud moment.”