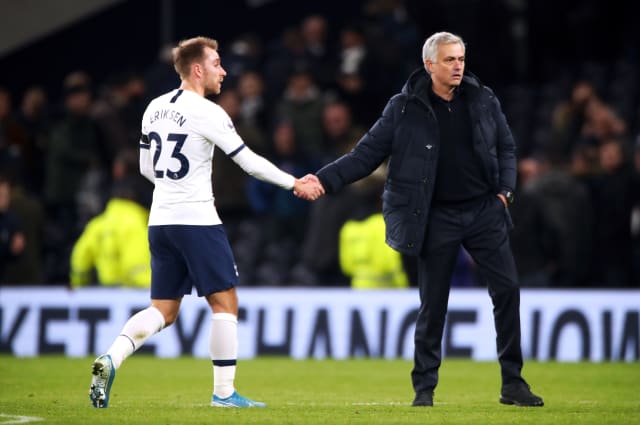 Eriksen’s six-and-a-half-year stay at Spurs came to an close this week when he joined Inter Milan, ending a long-running saga regarding his future.

The Dane was not prepared to sign a new contract, but despite the possibility of losing him on a free in five months time, Levy negotiated hard with the Serie A side and got £17million.

That money was immediately put towards Steven Bergwijn’s £25million fee from PSV and Mourinho felt it was good business.

“Mr Levy on the business side managed to do a great deal with six months on his contract,” he said.

“Mr Levy managed to get an important transfer fee that was used to buy a 21-year-old player like Steven Bergwijn. So, Mr Levy did fantastic for the club.

“Fantastic deal for a player that is free in a few months and again that money was reinvested in the purchase of Steven Bergwijn, which again he’s young, yes he’s young, but it’s a player with now five-and-a-half-years of contract with us and a player with fantastic conditions to be very good for us so I think the Christian situation was very well managed by Mr Levy.”

Mourinho knew that Eriksen wanted to leave the club since the day he arrived in November, after the Denmark international informed him he had no intention of renewing his contract.

Eriksen had already gone public with his desire for a new challenge and would have ideally left in the summer transfer window, but no serious interest was forthcoming.

Despite Mourinho knowing his intentions, he still involved Eriksen, whose form nose-dived following his failure to leave in the summer.

He paid tribute to Eriksen’s professionalism in a tough situation.

“Christian was a player that for a long time we knew – we didn’t tell because of a moral agreement with him – from the first day I arrived he told me he was not going to sign,” Mourinho added.

“From that moment I was just trying to build the team without him. That was the reason why I didn’t play him many, many times.

“At the same time, Christian being a good professional and having respect for the club and his team-mates I knew that with some limitations – there are always limitations with a player in his situation – that until his last day he tried to help the team and be a positive guy in the dressing room, which he was.

“Christian was a good guy in the dressing room, always a good professional, always a positive guy, with the limitations of somebody that wants to leave. You could feel in some matches he was not Christian. I feel that is normal.

“But he would always be a positive guy and a respectful guy. We were happy to have him here until the end of the season.”