Thiem ready to take on the ‘king’ again 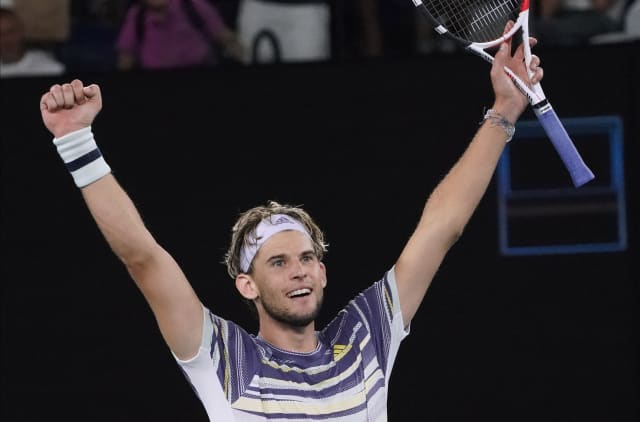 Dominic Thiem will try to dethrone the ‘king’ of Rod Laver Arena when he plays in his third grand slam final at the Australian Open on Sunday.

Once thought of as a clay-courter, Thiem has transformed himself into one of the best players in the world on hard courts and, after final losses to Nadal at the French Open the last two years, he will now take on Novak Djokovic at Melbourne Park.

The Serbian, who defeated Roger Federer on Thursday, has won all seven finals he has contested here and already holds the men’s record for most titles won.

Thiem said with a wry smile: “I’m always facing the kings of a grand slam in the final.

“We are playing in tough times, we young players. We always have to beat all these unbelievable legends.

“Of course, Rafa won Paris 12 times, Nole (Djokovic) here seven times. That’s an unbelievable achievement. But I try to take my experience (from) the last two major finals and try to improve myself even more.

“I think I did that from 2018 to ’19 in Paris, and I tried to improve even more now. In this one I have the feeling that I have great experience now. I’m feeling that I can really keep up my level for all the two weeks.”

Of their last five meetings, the Austrian has come out on top in four – including a brilliant encounter at the ATP Finals in London in November, where Thiem went on to make the final.

“It’s true, I won more of the last encounters than he did,” said Thiem. “But I think it doesn’t count so much.

“It’s absolutely his comfort zone here. He always plays his best tennis in Australia since many, many years. So I’m expecting that as well in the finals.

“I think I have to keep a good balance. Of course, I have to risk a lot. I have to go for many shots. At the same time, not too much. That’s a very thin line. In the last match against him, I hit that line perfectly in London.

“I’m feeling good on the court. I’m playing great tennis. So I’ll try to be at my absolute best on Sunday.”

One man giving Thiem a real chance is Zverev, who had been hoping to reach a first grand slam final.

“He’s playing the best tennis of his life,” said the German. “I think he’s playing much better than he played in London. I do believe he’s playing good enough. I wish him nothing but the best.”

Thiem, the older player in a slam semi-final for the first time, struggled with nerves at the start and it was the steadier Zverev who took the first set.

The second was decided in a tense 10th game, where Thiem saved two break points and shrugged off arguably the shot of the match from Zverev as he returned a smash for a clean winner.

There was a delay at the start of the third set after a row of lights went out, and the momentum swung back and forth on the resumption, with Thiem losing a break but then being rewarded for brave shot choices when he saved two set points at 4-5.

He played a brilliant tie-break and then came out on top of another deciding game in the fourth set to become the first Austrian to reach a singles final here.

Zverev was left with a feeling of what might have been, saying: “I had a lot of chances. I had 14 break points. That should be plenty. In the important moments, I didn’t play my best. He did. That’s where the match kind of went his way.

“I’ve just got to execute better next time. But credit to him. He’s playing unbelievable tennis right now.”

The disappointment for the 22-year-old German was balanced out by pride and satisfaction at finally managing to play his best at a grand slam.

He said: “It was a great tournament, a great match today. I came to this tournament different. I didn’t play my best. I went step by step, match by match. Usually I didn’t do that in grand slams. Maybe I can take that away.”