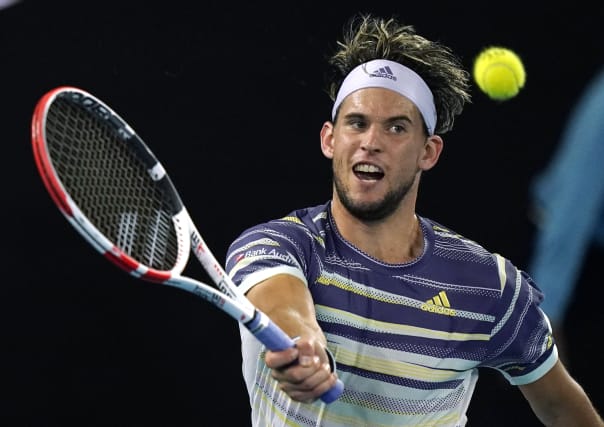 Dominic Thiem will play Novak Djokovic in the Australian Open final on Sunday after battling to a four-set victory over Alexander Zverev.

Thiem will contest his third grand slam final and first away from the French Open, while he is the first Austrian player, male or female, to reach a singles decider at Melbourne Park.

The fifth seed played a nervy first set, during which a smattering of rain led to the roof being closed, and saved two set points in the third set, with Thiem’s bravery on the big points ultimately proving the difference in a 3-6 6-4 7-6 (3) 7-6 (4) victory.

The 26-year-old’s reward is another shot at one of the big three in a slam final.

Having lost twice to Rafael Nadal at Roland Garros, Thiem now faces arguably the second most formidable challenge in tennis – trying to beat Djokovic in a final on Rod Laver Arena.

The Serbian has won all seven finals he has contested and already holds the men’s record for most titles won.

For Zverev, there will be disappointment that he could not go further but also satisfaction that his game is working again after a difficult 2019.

This was the first time the 22-year-old has played in a slam semi-final, with this run easily the most impressive he has been at one of the sport’s four biggest tournaments.

There was a huge amount at stake and the very different dynamic to Thiem’s clash with Nadal, where he had been the player freed from expectation, seemed to affect the fifth seed in the opening set.

Not only was Thiem the player who had been here before, he was also the older – for the first time in a slam semi-final – and had won six of his previous eight clashes with Zverev.

His performance against Nadal had only ramped up expectations further, but he began to find more of the powerful ground strokes that had bullied the Spaniard in the second set.

A break for 2-1 settled Thiem down only for the metronomic Zverev to level at 3-3.

Thiem responded immediately to forge back ahead and dug in through a tense final game to serve it out, saving two break points and shrugging off arguably the shot of the match from his opponent as he returned a smash for a clean winner.

There was a delay after one game of the third set when a row of lights at the back of the court went out.

Once the problem was fixed, again it was Thiem who made the first move with a break for 2-1. That might have become 4-1 but Zverev saved a break point and then levelled the set, refusing to let his opponent find any breathing space.

The German became fired up over a line call at 30-30 in the ninth game. With no challenges remaining, he implored umpire John Blom to overturn a call on a serve he felt had hit the line.

His appeals counting for nothing, he fired down a second serve ace, received a warning for verbal abuse and let out a huge ‘Come on’ as he held.

The momentum seemed to be with Zverev and he forced two set points on the Thiem serve but the fifth seed continued to go for his shots and reaped the rewards.

Thiem won three tie-breaks against Nadal and he was again unbeatable over the format here, playing a fine third-set decider and then holding his nerve to see it out after three hours and 42 minutes.