Quarterback contrast will be key to deciding Super Bowl 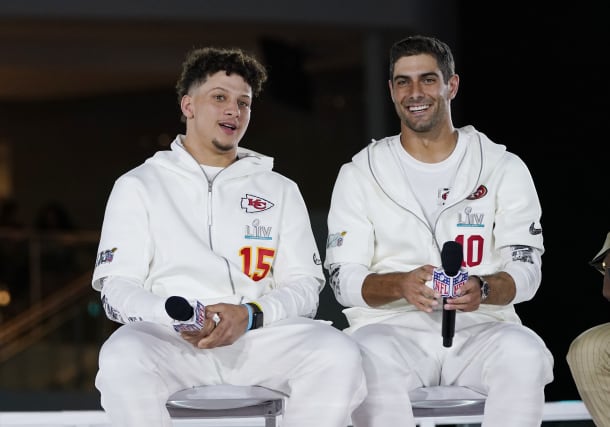 Super Bowl LIV will match up two deeply contrasting quarterbacks when the San Francisco 49ers and Kansas City Chiefs face off on Sunday.

The young, dynamic Chiefs are looking to build a dynasty around their emerging superstar signal caller Patrick Mahomes, while the 49ers have spent much of the past few weeks facing questions over whether their own man under centre – Jimmy Garoppolo – is good enough.

Garoppolo’s post-season numbers certainly leave open some questions. The 28-year-old, in his first full season as a starter, threw just eight passes for 77 yards in San Francisco’s 37-20 win over the Green Bay Packers in the NFC Championship game.

Of the 12 quarterbacks to have attempted more than one pass in the post-season this year, Garoppolo ranks joint 10th.

But suggestions that Garoppolo – who spent the first four years of his career backing up Tom Brady in New England – is a weak link for the 49ers are wide of the mark.

The knee injury suffered in week three last season, and his full health this time around, are a key reason why the 49ers are going to a Super Bowl one year after a dismal 4-12 record.

Quite simply, Garoppolo has not done much this post-season yet because, with the 49ers’ run game firing on all cylinders, he has not needed to. Why would he bother throwing against Green Bay when Raheem Mostert was rushing for 220 yards and four touchdowns?

If that situation were to change on Sunday, San Francisco are backing their man.

“I feel like me, George (Kittle), Deebo (Samuel), Kendrick Bourne, everybody, it’s just not on Jimmy. It’s on us. We’ve got to get open. I feel like when we get open, he’s going to deliver the ball, so it’s hard to just say it’s on Jimmy’s hands.”

And Garoppolo has shown he can do it. In games where the 49ers’ usually strong defence has given up more than 25 points, they still have a 6-3 record when Garoppolo plays, and he has gone toe-to-toe with the likes of New Orleans Saints great Drew Brees and Seattle Seahawks star Russell Wilson in shootouts and come out on top.

“Hopefully I’m still progressing and learning,” Garoppolo said. “I’ve only played so many games so I’m just getting started.”

That could perhaps too be said of Kansas City’s do-everything star Mahomes, but the 24-year-old, son of ex-Major League Baseball pitcher Pat Mahomes, has already produced reel upon reel of highlights.

In his first two full seasons as a starter, Mahomes has claimed an MVP title, compiled a 27-8 record, and thrown for more than 11,000 yards and 93 touchdowns.

In a pinch, Mahomes is the man you want under centre, something he has shown twice this post-season. The Chiefs fell 24-0 down to Houston in their Divisional Game before scoring 28 second-quarter points and winning 51-31.

Against Tennessee in the Championship Game, they rallied from 17-7 down to win 35-24. And Mahomes has done this before: he is now 5-4 in games where Kansas City have trailed by at least 10 points.

The spotlight has never been brighter than it will be on Sunday, but Mahomes does not seem like the sort of character to be fazed.

“You have to visualise it if you want to go out there and do it,” he said when asked if he had pictured himself lifting the Vince Lombardi Trophy.

“It’s about going out there and executing the game plan at a high level.”