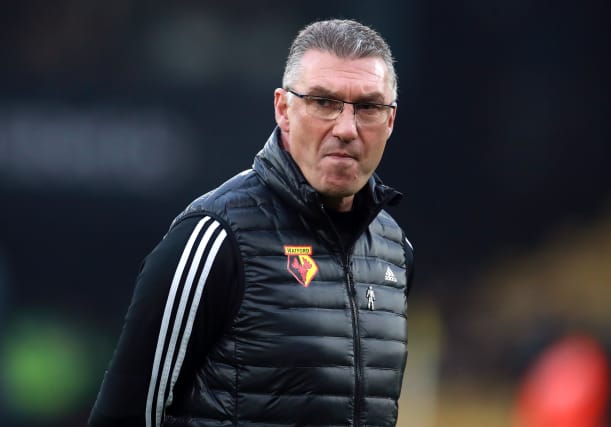 Manager Nigel Pearson believes Watford will not be struck down by fear in their fight for Premier League survival.

Since taking the job in December, Pearson has overseen a resurgence to give Watford a realistic chance of staying in the top flight, with the club having endured a dismal start to the campaign prior to his arrival.

A strong run of results temporarily lifted Watford out of the drop zone before they suffered a late defeat at relegation rivals Aston Villa in their last league outing.

Forty-eight hours later, Pearson’s side were dumped out of the FA Cup following an extra-time defeat against Sky Bet League One Tranmere in their third-round replay at Prenton Park.

But speaking ahead of Watford’s fixture against Everton at Vicarage Road on Saturday, Pearson said: “I don’t feel there is any fear in dealing with the situation that we find ourselves in.

“The response this week in terms of how the players have behaved and interacted around the training ground following those setbacks remains very positive and that is something we need to focus on.

“When you are in a difficult situation, and a relegation battle is always going to be a tough one for everyone involved, the process of how we prepare for games has to be measured and realistic.

“Providing that the environment feels stable enough, people can be themselves, and the bottom line is that is about the player being in a good enough place in their own heads to perform.

“That is the priority for me and my staff to make sure physically they are in the best condition they can be, but also mentally that they can play without fear. Fear can be a dangerous thing to have around.”

Pearson’s philosophical approach to Watford’s relegation fight is far removed from the perception of those who depict him as a manager who rules with an iron fist.

“That can be down to perception as to what I might look like and how I come across, but I have never been a shouter and a bawler on a daily basis,” added Pearson, 56, who is back managing in the Premier League after a four-year absence.

“I might be a bit different, but I am fundamentally the same person. I haven’t become a hippy overnight.

“I am older and I have promised myself that I am going to try and enjoy the challenge.”

Pearson will be boosted by the return of Danny Welbeck for Saturday’s match against the Toffees.

The 29-year-old forward, capped 42 times by England, has been sidelined since October with a hamstring problem. Midfielder Will Hughes will also be available for selection following his injury lay-off.