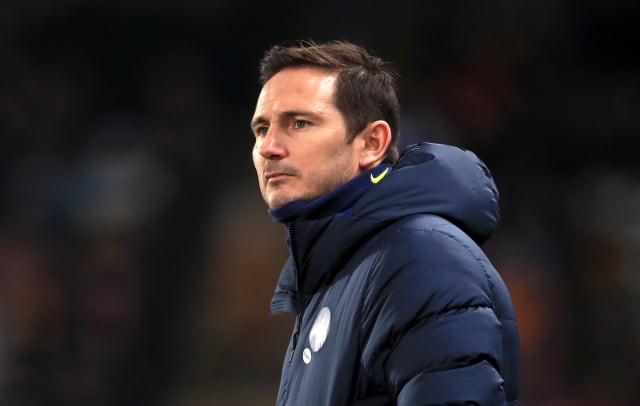 Frank Lampard fears Chelsea are now underdogs for a top-four Premier League finish after failing to strengthen their squad in the January transfer window.

Chelsea chased Paris St Germain’s Edinson Cavani and Napoli’s Dries Mertens but wound up empty-handed in a frustrating month, with Olivier Giroud staying at Stamford Bridge as a result.

Asked if he is worried about other teams strengthening while Chelsea missed out, Lampard said: “Yes. The reality of the fact that we’ve not done business here, for whatever reason.

“That’s the transfer window, but if I’m looking at it with my business head on and looking around us in the table, Manchester United obviously have signed a big, world-class player in my opinion.

“And the teams around us, Sheffield United have made some fantastic signings, Chris Wilder’s job is incredible because he’s had years to work with that group and now they are adding where they see that they need to.

“Tottenham have signed a few, and again, they are not far behind us.

“And not only have they signed a few but a couple of players have left, not being too crude about it, but they were coming towards the end of their contracts and weren’t happy being at the club any more.

“And that’s sometimes as important as bringing players in, that you can change the feeling of the group, if players are not willing to be there.

“So I think that’s smart business on that part, and now what remains to be seen will be seen.

“From my view, and this is not to talk ourselves down, because we’re six points clear in fourth, now we become probably the underdogs and the outsiders to some point, because teams have strengthened around us. It’s a fact.”

While clearly frustrated with Chelsea’s inability to recruit this month, Lampard will still refuse to compromise on quality.

Asked if no signings were preferable to the wrong signings, Lampard said: “Yes. Absolutely. A lot of names get bandied around towards the end of the window.

“The reality is I have an idea of where I want to get to. And I don’t think any knee-jerk reaction from myself or the club would have been positive either.

“I want to work towards a longer-term plan and have trust in that.”

Refusing to lament a forgettable January window for long, Lampard insisted there was only one route to a top-four finish.

When asked how to shrug off his frustrations, Lampard said: “Work. Work. I have to be the first person that remains positive, no matter what.

“And we know that recruitment is huge for a team that wants to be successful.

“But it’s a fact and people will get bored if I keep crying about that fact.

“At the start of the season nobody had us in their top four, nobody.

“The reality is now that we’re in fourth but it’s going to be a real big fight.