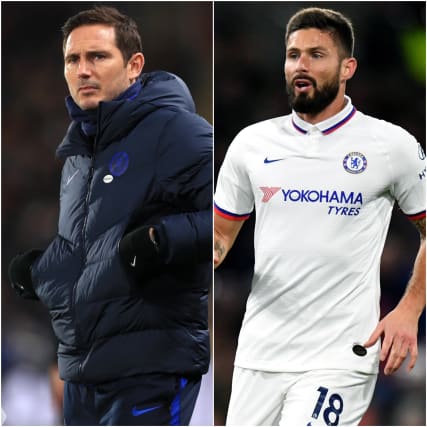 Frank Lampard has confirmed Olivier Giroud will remain at Stamford Bridge as he does not expect Chelsea to make any signings before the close of the transfer window.

Giroud had the chance to move to Tottenham or Inter Milan, but despite his not moving Lampard insisted the 33-year-old still has a big role to play for the Blues this term.

Asked if Chelsea were close to recruiting Mertens from Napoli, Lampard said: “No. The window is probably 95 per cent shut for us.

“So the answer will probably be no to the players I’m guessing you’ll be asking about.”

Chelsea were always willing to let Giroud leave in the January window, but only if they could recruit a direct replacement.

And after being thwarted on a number of targets, Lampard now believes Giroud will refocus on the task in hand with Chelsea.

“Will he leave? No… no ins means no outs,” said Lampard.

“Olivier Giroud in this window has been incredible as a professional and as a man.

“We all know there’s been interest and I’ve sat here at every press conference and said it could happen but only if it worked for all parties, so the club and the player.

“He’s been impeccable in that period and I’ve got huge respect for him as a man and a player.”

Abraham could yet shake off his ankle injury in time to lead Chelsea’s line in Saturday’s Premier League clash at Leicester.

The 22-year-old hobbled off the pitch at the end of Chelsea’s 2-2 Premier League draw with Arsenal, and missed the FA Cup victory at Hull.

But the former Aston Villa loanee trained on Friday and could yet be fit for the King Power Stadium trip.

“He’s trained today and felt OK, but we need to see if there’s a reaction,” said Lampard.

“It’s a pain injury. We’ll test him in the morning. But he did get out there today and that’s good in the longer term.”