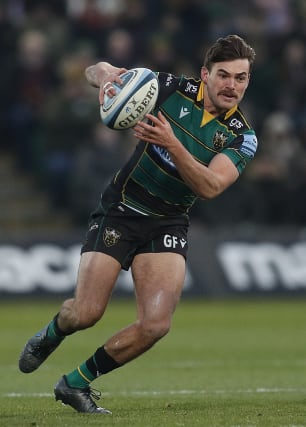 England have sprung a surprise by naming Northampton debutant George Furbank at full-back for Sunday’s Guinness Six Nations opener against France in Paris.

Furbank has been thrust into the starting XV as part of a reshuffled back three after Anthony Watson withdrew from contention on Thursday because of a calf injury.

The 23-year-old has been highly influential in Saints’ superb start to the Gallagher Premiership with his speed, running lines and vision catching the eye of Eddie Jones.

“We’ve picked a strong forward pack which is part of the England way and an exciting backline with young George Furbank playing his first Test,” England head coach Jones said.

Furbank’s inclusion appears to end the experiment of playing Elliot Daly at full-back, a position he has held since June 2018.

Daly was exposed during the World Cup final defeat by South Africa and he has been shifted to the left wing with Jonny May completing the back three, for which there is no cover on the bench.

Gloucester’s Ollie Thorley has been jettisoned completely with Jonathan Joseph and Ollie Devoto the back-up threequarters.

Mako Vunipola is missing from the matchday 23 completely despite England stating on Wednesday that he was forced to miss that day’s training session with an eye injury as a precautionary measure only.

Joe Marler starts at loosehead prop in his absence as one of three changes in personnel to the side toppled 32-12 by the Springboks in Yokohama last autumn.

Bath prop Will Stuart is set to be the second uncapped player to make his debut at the Stade de France after being picked on the bench.

“It has been a massively exciting week for us,” said Jones, whose squad have been preparing for the Six Nations in the Algarve.

“It’s the start of the Six Nations, the best rugby tournament in the world. We have had a great preparation in Portugal with a quality training week this week.

“France can expect absolute brutality from England, we are going to go out there to make sure they understand what Test rugby is.