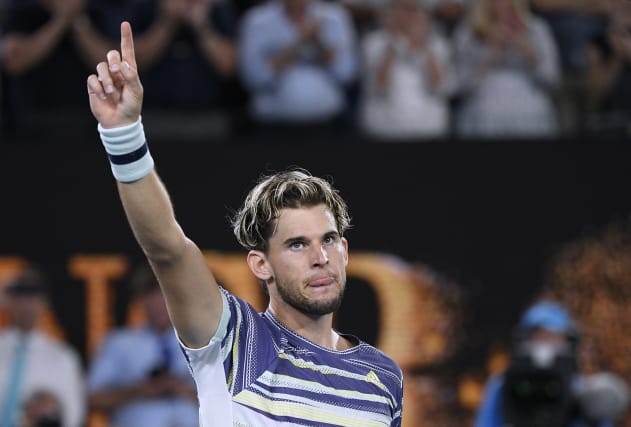 Dominic Thiem battled his way into a third grand slam final with victory over Alexander Zverev at the Australian Open on Friday.

Thiem went into the clash as the favourite after ousting Rafael Nadal and he came out on top of another close tussle, winning 3-6 6-4 7-6 (3) 7-6 (4) to set up a title decider against defending champion Novak Djokovic.

Jamie Murray and American partner Bethanie Mattek-Sands made it through to the mixed doubles final while there were wheelchair doubles titles for Jordanne Whiley, with Yui Kamiji, and Gordon Reid and Alfie Hewett.

Tennis is one of the most international sports and there will be a first in the girls’ singles final on Saturday when the tiny nation of Andorra is represented by 14-year-old Victoria Jimenez Kasintseva, who was also the youngest player in the draw.

Jimenez Kasintseva is the daughter of former player Joan Jimenez, who said on ausopen.com: “We are from a very small country, with very big difficulties to play tennis because we are a ski country. We have only one indoor court in the whole country.”

The teenager hopes to be an inspiration, saying: “I’m kind of the first tennis player (from there), so I would like to encourage Andorran tennis players to fight for it because I’m sure there’s a lot of people there that want to be living this dream.”

Eagle-eyed viewers will have spotted a change in branding for the Australian Open on Friday. ‘Australia is Open’ was written on the courts as the country tries to encourage tourists to keep visiting despite the devastating wildfires.

The tournament has been at the forefront of fundraising efforts, with close to six million Australian dollars (£3million) already raised by the tennis community.

Nick Kyrgios has led those efforts and Andrew Colvin, head of the National Bushfire Recovery Agency, said: “It’s fantastic. I’m from Canberra. Nick is a Canberra boy. The whole Canberra community is behind him, as is all of Australia. We loved watching every ace, knowing some of it is going to find its way to our communities in need.”

A new Australian Open champion will be crowned when Garbine Muguruza takes on Sofia Kenin in the women’s final on Saturday evening.

Muguruza is looking to add to her 2016 French Open title and 2017 Wimbledon crowd after returning to top form this fortnight while 21-year-old American Kenin will play in a first grand slam final.

Murray will chase an eighth grand slam title when he and Mattek-Sands face Barbora Krejcikova and Nikola Mektic in the mixed doubles final.