‘We are older’ – Guardiola laughs off calming of Mourinho rivalry 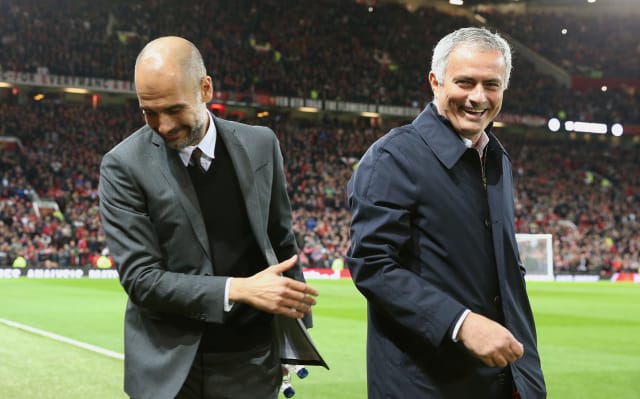 Pep Guardiola paid tribute to Jose Mourinho as he admitted the pair’s rivalry had simmered down.

The Manchester City boss comes up against his old adversary as he takes his side to Tottenham in the Premier League on Sunday.

Guardiola and Mourinho fought out some intense duels during their times as managers of Barcelona and Real Madrid respectively.

That rivalry was expected to reignite when they both moved to Manchester clubs in 2016 but, in the period leading up to Mourinho’s sacking at United in Deember 2018, it was noticeably less ferocious.

“I’m sorry for you!” Guardiola told media at a press conference to preview this weekend’s game. “I know you were looking forward (to it) but I’m sorry. Maybe we are older and more experienced.

“Every time when we played when he was at United, always the people weren’t talking about how we are going to play or how he is going to play, or who was going to win.

“It was just about my press conference, did I say something or did he say something? But, I’m sorry, I told you, it didn’t happen.”

Guardiola and Mourinho are two of the most successful managers in the modern game and the City boss insists he has the utmost respect for his Spurs counterpart.

Mourinho had almost a year out of the game before taking over at Spurs following the sacking of Mauricio Pochettino last December. Guardiola feels the Portuguese still has a lot to give and should not be judged on the sorry end to his tenure at Old Trafford.

Guardiola said: “Always I had incredible respect for what he’s done for football and in his career, always. Sometimes a situation happens and it’s part of our job but that’s all.

“The value of Jose, a manager with a lot of experience with a lot of success, is not to be judged on one season, or one-and-a-half seasons.

“I know we get judged for the last game, the ideas we have or something we do, but as a professional I try to judge my colleagues not for one season but 10 or 15 years, a long career, that for me gives more value.

“Periods for managers are up and down, everyone has it. You have seasons with good and bad periods.”

City have been boosted this week by the return to full training of winger Leroy Sane. The Germany international has been out since suffering a knee injury in the Community Shield last August.

Guardiola said: “Sane started to train with us, that’s good news, and he moves, surprisingly, really well. It was nice to see him back.”

While Sane could return to action in the coming weeks, Guardiola was unclear on the 24-year-old’s contract situation. Sane’s current deal ends in 2021 and he has been repeatedly linked with Bayern Munich.

Guardiola said: “The last info I had was that we made him an offer a long time ago and all the time he didn’t reject it, but after that I don’t have any news.”