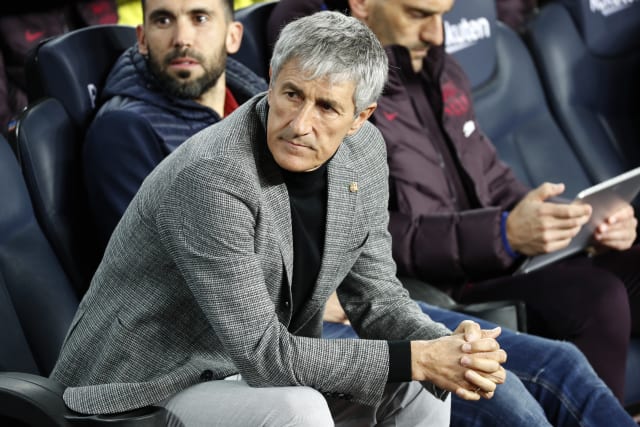 Barcelona head coach Quique Setien has called for more from his players despite a 5-0 win over Leganes in the Copa del Rey last 16.

Lionel Messi struck a second-half brace after Frenchmen Antoine Griezmann and Clement Lenglet put the hosts two up at half-time.

Substitute Arthur was also on target to help Barca cruise into the quarter-finals and bounce back from the weekend’s LaLiga defeat to Valencia.

But new boss Setien told a press conference: “We have done many things well, but I am not happy at all because we lost control of the game in the final stretch of the first half.

“We have done very well for the first 20 to 25 minutes, we have been precise and we have had control.

“It is true that they could have hurt us and that they have reached us.

“Do not see I am completely satisfied because we have lost control at some points in the game, especially at the end of the first half.”

The victory was Messi’s 500th since his Barcelona debut and he was back to his best after a difficult encounter at Valencia.

Earlier in the day, the Nou Camp club confirmed they would not be signing a forward to make up for the absence of Luis Suarez, who is not expected to play again this season after surgery on his knee.

Setien is relaxed about the situation and pointed out Ousmane Dembele will return in February after suffering a thigh injury two months ago.

“I have confidence in the players I have,” the 61-year-old added. “We have to think about what there is and we are happy because in a few weeks we will recover Dembele.”

Javier Aguirre admitted Leganes always knew it would be tough to progress once the draw for the last 16 was made.

He only took over in November and with the club in the LaLiga relegation zone, the Mexican explained their focus has always been survival.

“My competition was not this,” Aguirre told reporters. “We were excited in the previous round, but when we saw the draw we knew it was complicated.

“They were superior and now we have to think about LaLiga which is what concerns us.

“In the second half, we were a messy team and we were at the mercy of Barcelona. We tried to make up the score, but with it 3-0, it was game over.”