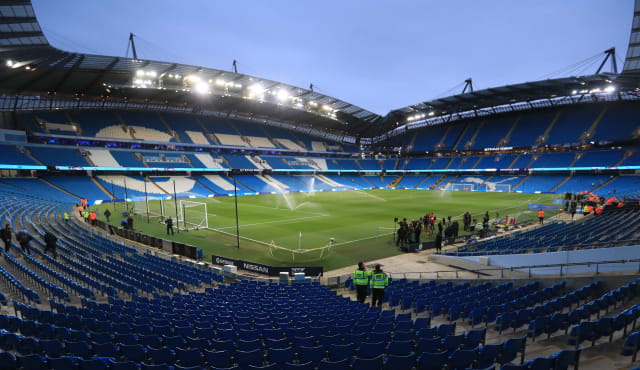 Police and the Football Association are investigating a number of alleged incidents of crowd disorder during Wednesday’s derby clash between Manchester City and Manchester United.

Greater Manchester Police has also confirmed a 43-year-old man was arrested at the Etihad Stadium on suspicion of possessing a flare.

The PA news agency understands police are now working with City to identify any offences or offenders during and after the Carabao Cup semi-final second leg. The FA is also understood to be aware of the alleged incidents and is investigating.

Feelings ran high throughout the game, which United won 1-0 but still lost the tie 3-2 on aggregate.

Missiles were thrown between both sets of supporters including seats and pyrotechnics.

Footage also emerged on social media of individuals in a City section of the ground appearing the make aeroplane gestures in reference to the Munich air disaster, the 62nd anniversary of which is next week.

The incidents came after the Premier League clash between the two clubs at the same venue in December was marred by a City supporter making an apparent racist gesture towards United players.

Speaking after the game, both managers condemned the behaviour of certain supporters.

United boss Ole Gunnar Solskjaer said: “Yes, we want rivalry but let’s keep it at a sane level and let’s make sure we eradicate that now.”

City counterpart Pep Guardiola said: “When you talk about what happened, I didn’t know it but if it would happen, that is not nice. Absolutely not.”