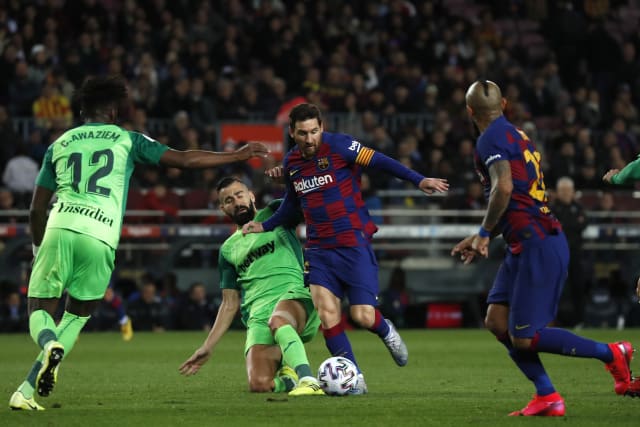 Lionel Messi was back to his best to help Barcelona cruise into the Copa del Rey quarter-finals with a 5-0 thrashing of Leganes.

After firing a blank in the weekend defeat to Valencia in LaLiga, the Argentinian was involved in every goal at the Nou Camp and struck a brace on a comfortable evening.

Before captain Messi had found the net, Frenchmen Antoine Griezmann and Clement Lenglet had put the home side in control of the last-16 tie with first-half efforts against their divisional rivals.

It took Barcelona just four minutes to open the scoring and Griezmann, after his brace against Ibiza last week, was in the goals again.

Messi produced a wonderful pass to send nelson Semedo away in behind the Leganes defence and he cut back for the former Atletico Madrid forward, who took a touch and slotted home for his 12th goal of the season.

It was nearly 2-0 five minutes later when Griezmann found the net again, but Jordi Alba was ruled to be offside and the effort was disallowed after a VAR check.

Quique Setien’s side continued to dominate – despite Martin Braithwaite causing the hosts some problems – and doubled their advantage in the 27th minute.

Messi curled a corner kick into the area and it was headed home by centre-back Lenglet at the front post.

Leganes came out fighting after conceding and Oscar Rodriguez saw a shot deflected over, but Barca held a two-goal lead at half time and boasted more than 75 percent possession.

A third goal arrived with 59 minutes on the clock when Frenkie de Jong played a defence-splitting pass and Messi produced a trademark run before his shot took a couple of deflections and nestled into the back of the net.

With the game wrapped up, Alba and Arturo Vidal were withdrawn with Junior Firpo and Ivan Rakitic introduced.

Griezmann made way with 18 minutes left and his replacement Arthur quickly grabbed a fourth for Barca.

Ansu Fati and Messi had efforts blocked before the substitute smashed home in the 79th minute at the Nou Camp.

The final word went to Barcelona’s captain when he latched onto another excellent pass from Ivan Rakitic, rounded Ivan Cuellar and fired into the roof of the net with a minute left.

It handed new manager Setien a third win from his four matches in charge ahead of Sunday’s LaLiga home fixture with Levante.