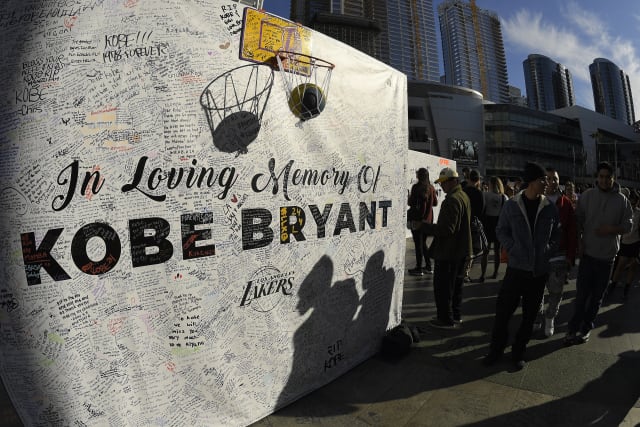 The Los Angeles Lakers “have been forever changed” by the death of five-time NBA champion Kobe Bryant.

Bryant died aged 41 alongside his 13-year-old daughter Gianna and seven others in a helicopter crash in California on Sunday.

His death led to an outpouring of tributes from around the globe, both from inside and outside the world of sport.

And on Wednesday night the Lakers – the franchise that Bryant represented throughout his 20-year NBA career and holds the scoring record for – added to the tributes after a long period of reflection.

“We are devastated and have been forever changed by the sudden loss of Kobe Bryant and his daughter, Gianna,” read a Lakers statement.

“We send our love to Vanessa, the Bryant family, and to the families of the other passengers.

“Words cannot express what Kobe means to the Los Angeles Lakers, our fans, and our city. More than a basketball player, he was a beloved father, husband, and teammate. Their love and light will remain in our hearts forever.”

Having lost a husband and daughter in the accident, she wrote on Instagram: “My girls and I want to thank the millions of people who’ve shown support and love during this horrific time. Thank you for all the prayers. We definitely need them. We are completely devastated by the sudden loss of my adoring husband, Kobe — the amazing father of our children; and my beautiful, sweet Gianna — a loving, thoughtful, and wonderful daughter, and amazing sister to Natalia, Bianka, and Capri.

“We are also devastated for the families who lost their loved ones on Sunday, and we share in their grief intimately. There aren’t enough words to describe our pain right now. I take comfort in knowing that Kobe and Gigi both knew that they were so deeply loved.

“We were so incredibly blessed to have them in our lives. I wish they were here with us forever. They were our beautiful blessings taken from us too soon. I’m not sure what our lives hold beyond today, and it’s impossible to imagine life without them. But we wake up each day, trying to keep pushing because Kobe, and our baby girl, Gigi, are shining on us to light the way. Our love for them is endless — and that’s to say, immeasurable. I just wish I could hug them, kiss them and bless them. Have them here with us, forever.”

Vanessa Bryant has started a foundation to raise money for the families of the other families.

Lakers will play their first game since the tragedy on Friday night at home to the Portland Trail Blazers at 7.30pm PST (3.30am GMT).

Lakers players returned to their practice facility on Wednesday, with coach Frank Vogel the only member to talk to the press.

Vogel revealed he was the one who had the “daunting task” of breaking the news to his players – including Bryant’s close friend LeBron James – as the team flew back to LA from Philadelphia on Sunday.

And the 46-year-old is determined the team will continue to uphold Bryant’s values on the court as they chase a first championship since 2010, when Bryant led his team to his fifth title.

“We want to represent what Kobe was about more than anything,” Vogel said, according to ESPN.

“We’ve always wanted to make him proud. And that’s not going to be any different here.

“He was the most feared man in the league for an entire generation. The influence is profound league-wide, basketball community-wide, worldwide, Lakers family-wide.”

The tributes to Bryant continued on Wednesday night as players from NHL team the Los Angeles Kings – who share Staples Center with the Lakers and the Clippers – all arrived at the venue wearing either number eight or number 24 Bryant jerseys while a pre-game tribute video was followed by 24 seconds of silence.

NBA side the Brooklyn Nets also player a tribute video and had 24 seconds of silence at the Barclays Center while they also left bouquets of purple and yellow flowers on two chairs – the same seats Bryant and Gianna were pictured sitting in during a game on December 21.