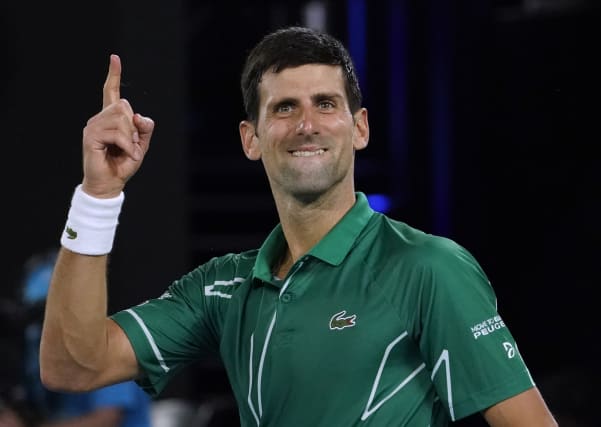 Djokovic has never failed to win the title once he has made the semi-finals at Melbourne Park and his 7-6 (1) 6-4 6-3 success over his old rival means he will have the chance to claim an eighth title on Sunday when he faces either Dominic Thiem or Alexander Zverev.

That will extend the men’s record he set last year with a straight-sets thumping of Rafael Nadal.

A similar scoreline was expected here, with Federer going into a match as probably a bigger underdog than any contest since the early stages of his career.

Despite not facing an opponent ranked in the top 40, he had twice escaped from the brink of defeat, coming back from 8-4 down in a deciding tie-break against John Millman in round three and then improbably saving seven match points against Tennys Sandgren in the quarter-finals.

That came despite Federer struggling with a groin problem that prompted speculation about whether he would even take to the court for this match.

He certainly would not have wanted to take a heavy beating in his 50th clash with Djokovic and first at a grand slam since he was unable to take two match points in last summer’s dramatic Wimbledon final.

Federer took heart from beating the Serbian at the ATP Finals in November but he had not got the better of him in a best-of-five-sets match since Wimbledon 2012, and not on hard courts for more than a decade.

But, in energy-sapping heat, unexpectedly it was Federer who made a flying start, breaking Djokovic in his first two service games and having three chances to break again for a 5-1 lead.

At one stage, Federer had hit 20 winners and Djokovic only four, but the defending champion dug in just in time, keeping it to one break and then breaking to love when his opponent served for the set at 5-3.

Federer saved more break points to force a tie-break but by now Djokovic had stopped missing and was finding some fine offensive shots of his own.

At the end of the set, Federer headed off court with the trainer for another medical timeout, this one seemingly for his lower back.

Despite his improvement, Djokovic, too, consulted the doctor and took a pill. The 32-year-old had cryptically revealed after his quarter-final victory over Milos Raonic that there was more bothering him than simply the contact lens problems he experienced, with speculation about a stomach issue.

Federer reset well at the start of the second set but it was his serve under consistent pressure, while the 38-year-old began to look a little uncomfortable moving to his forehand side.

He held firm until the 10th game, when Djokovic forced a set point and took it with a forehand flick, celebrating exuberantly.

Federer had said after beating Sandgren that he believed in miracles, but his Melbourne luck had run out and Djokovic moved through to his 26th grand slam final where he will try to win a 17th title.