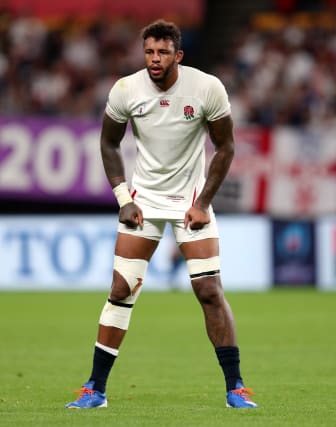 Courtney Lawes is comfortable sharing his political views on social media due to what he sees as the absence of voices representing his outlook.

On the eve of Brexit day, the England second row of Jamaican heritage arrived in Paris for Sunday’s Guinness Six Nations clash with France stating he is happy to continue airing his beliefs.

Lawes is highly active on Twitter, where posts such as “TRIGGER WARNING. England is not a racist country. Just thought I’d clear that up” draw large numbers of responses.

“As you get older, you define your own opinion,” the 30-year-old Northampton forward said.

“I just didn’t feel greatly represented in terms of what I was seeing on TV, so I thought I’d get involved in some stuff. It’s a bit of fun.

“I think we are in a situation in society where people are complaining about stuff all the time and I’d just had enough of it, so I thought I’d wade in.

“I don’t agree with a lot of things some people are saying. The only black people you see on TV at the minute are complaining about everything. I don’t feel that way, which is why I said what I said.

“The response has mainly been positive. In my politics I’m quite centred, not really one side or the other, and I hold the opinions of quite a few people.

“I’ve not had too much backlash. Obviously there are people that disagree with you, but that is part of life. I’m perfectly happy being me and representing my opinions.”

As a sportsman willing to be forthright on topics that are usually considered risky to tackle in public, Lawes knows his is a contrarian approach.

“It’s because we are not our own boss, so you have to be careful with what you say,” he said

“I don’t think I am that controversial. I just try to say things generally how they are. I am old now, so if you want to fire me…”

For all his strident views on social and political issues, Lawes’ immediate concern is helping England make a triumphant start to the Six Nations by toppling a new-look France side.

Eddie Jones names his starting XV on Friday, with Lawes a candidate for blindside flanker.

Jones has challenged his team to become the greatest the sport has seen and Lawes believes it is an ambition worth striving for.

“We could certainly do that. It’s on us now, on our shoulders, that if we want to get there, it’s up to us,” Lawes said.

“Eddie will do everything he can and we know that, the rest of it is all up to us.

“It’s been discussed among us. Eddie wouldn’t say that if he didn’t believe it and we believe it, we agree with it and we will do everything we can to make that happen.

“New Zealand have been the most dominant team over the last decade. That is what we will be looking to surpass.”