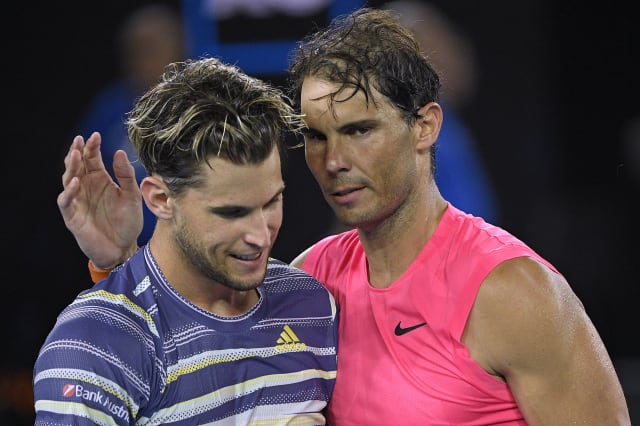 Rafael Nadal praised Dominic Thiem after being muscled out of the Australian Open in the quarter-finals by a superb performance from the Austrian.

World number one Nadal had hoped to equal Roger Federer’s record of 20 grand slam singles titles, but that will have to wait after fifth seed Thiem powered his way to a 7-6 (3) 7-6 (4) 4-6 7-6 (6) victory to set up a clash with Alexander Zverev.

Zverev had joked of his rivals: “I’ll have a cold glass of Coke sitting in my hotel room with my AC (air conditioning) hopefully watching them play for six hours.”

It did not quite take that long but, after four hours and 10 minutes, it was Thiem who clinched another dramatic Melbourne encounter, joining Zverev in striking a much-needed blow for the 20-somethings against the old guard.

Nadal said: “It has been a very good match. He has been playing very well. Playing very aggressive, great shots. Even from difficult positions, he was able to produce amazing shots.

“I honestly didn’t play a bad match. My attitude was great. Good, positive, fighting spirit all the time. I didn’t give up in one moment during the whole match. I gave myself an opportunity until the last point.

“Of course I am sad. I lost an opportunity to be in the semi-finals of another grand slam. But I lost against a great opponent.”

Thiem looked like he might have blown his chance when he played a horribly nervous game serving for the match at 5-4 in the fourth set but recovered impressively in the tie-break.

Nadal saved two match points, the second with a HawkEye challenge after a Thiem lob had been called in, but on the third the Spaniard netted a forehand.

Thiem said of the 5-4 game: “A special situation for me, serving for the match against Rafa. Such a really mentally tough situation. I couldn’t handle it but I turned it round in the tie-breaker.

Thiem, beaten by Nadal in the last two French Open finals, had never reached the last eight here before but, if he can maintain this form, he will have a good chance of winning a first grand slam title.

Nadal would have expected a fierce battle, having taken nearly five hours to see off Thiem in their only previous grand slam meeting on hard courts at the US Open in 2018.

The 26-year-old has improved significantly since then and he stunned Nadal time and again with his power off forehand and backhand, his court coverage and the way he was able to recover from seemingly desperate positions.

Thiem has surely never played better, yet Nadal will be hugely disappointed that he did not capitalise on leads he had in both the first two sets.

One of Nadal’s greatest strengths has been his mental fortitude at the biggest moments, but he could not serve out the opening set at 5-3 and made mistakes in the tie-break.

The top seed played more aggressively at the start of the second set and got his reward with a break for 3-2, but a time violation in the next game left him furious, Nadal saying to umpire Aurelie Tourte: “You don’t like the good tennis.”

He lost his rhythm completely, becoming increasingly agitated with a malfunctioning fan next to his seat and allowing Thiem to break back for 4-4 with a meek double fault.

Nadal saved one set point at 5-6 and fought back from 0-4 to 4-4 in the tie-break only to play a dreadful drop shot two points later, giving Thiem the impetus to take the set, with a little help from the net cord.

It is 13 years since Nadal won a match from two sets down. He took a step towards it by breaking Thiem to win the third, crouching down and fist-pumping wildly in celebration.

Nadal had three chances to break again at the start of the fourth, but Thiem dug in just when it looked like the momentum had really turned and wrestled it back in his direction.

He acknowledged his fortune in benefiting from a series of net cords, including on the penultimate point, saying afterwards: “I think all the match was on a very good level, I think we were both on great form. We already had this epic match in New York two years ago.

“Today I was really feeling I was lucky in the right situations. The net cord was really on my side. He’s one of the biggest legends this sport’s ever had so you need some luck to beat him.”

So much has been expected of the German for so long, but it was not until he came to a slam a little under the radar that he has been able to make his big breakthrough.

Zverev had a difficult 2019 and arrived in Melbourne with his serve apparently in crisis and having lost all three of his matches playing for Germany at the ATP Cup.

The 22-year-old, who has promised to give all his prize money to wildfire relief efforts should he win the tournament, said: “I was very impatient. I was paying too much attention to them. The grand slams maybe meant too much for me.

“This year I actually came into the Australian Open with absolutely no expectations because I was playing horrible.”