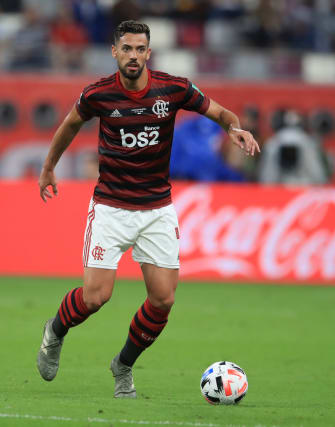 The 26-year-old became the first Spaniard to win the Copa Libertadores in November and moves to the Emirates Stadium for the remainder of the 2019-20 season.

Arsenal announced the deal on Wednesday afternoon and the PA news agency understands the club have paid an initial loan fee of around £4million and have the option to make the move permanent for an additional £8million.

Mari, who played the whole game for Flamengo as they lost to Liverpool in extra-time of the World Club Cup final last month, becomes the first signing under Gunners head coach Mikel Arteta.

Having travelled to London with Arsenal technical director Edu over the weekend, Mari returned to Brazil amid speculation the move had stalled due to a disagreement about the terms of the deal.

But the switch has now gone through and Edu revealed Arsenal have been tracking Mari for some time.

“Pablo is an experienced player who will provide us with additional defensive quality,” he said.

“We have been monitoring Pablo’s career for a while and we are very pleased to have reached agreement with Flamengo for him to join us initially until the end of our season.

“Together with Mikel and his coaching team, we are all looking forward to seeing Pablo in an Arsenal shirt.”

The need to add to his defensive ranks was not lost on Arteta, who has seen Calum Chambers and Shkodran Mustafi sidelined with injuries and Konstantinos Mavropanos leave for Nurnberg on loan.

Mari came through the ranks at Real Mallorca before moving on to Gimnastic and then to Manchester City.

He failed to make a first-team appearance at the Etihad Stadium but would have worked closely under Arteta, who was Pep Guardiola’s assistant at the time.

“When I spoke to my agent, it was a big thing that Arsenal were interested in me,” Mari told the Arsenal website.

“This is one of the best clubs in the world, so I’m absolutely delighted to be joining. I’m really looking forward to playing in this jersey and helping my team.”

“Right now I want to focus on the day-to-day side of things. I think we need to put the plans to one side for now because the most important thing is to take things one day at a time and focus on achieving short-term goals.

“We need to change the dynamic around the team, so the short-term objectives are the most important thing. As I’ve said, we have Mikel’s ideas, aligned with the club, and we need to perform very well to change things.”