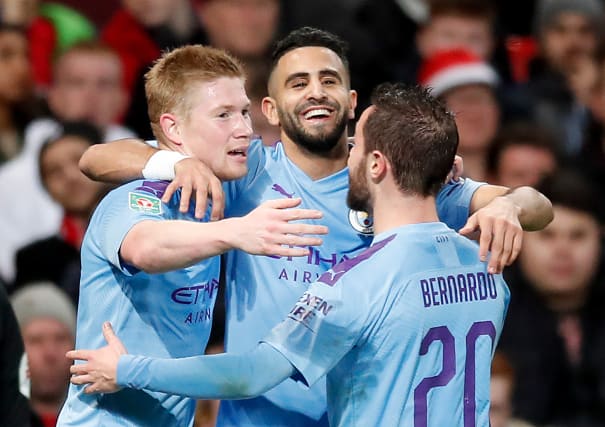 Manchester City will play Aston Villa in the Carabao Cup final after beating Manchester United 3-2 on aggregate in the semi-final, despite a 1-0 second-leg defeat at the Etihad Stadium.

Here, the PA news agency looks back over the six matches that took Pep Guardiola’s side into the March 1 date at Wembley.

City kicked off their quest for a third straight League Cup in style as they breezed to victory over Preston at Deepdale. First-half goals from Raheem Sterling and Gabriel Jesus and a Ryan Ledson own goal wrapped victory up early for Pep Guardiola’s men.

Sergio Aguero scored twice as City beat a Southampton side still shell-shocked by their 9-0 defeat to Leicester four days earlier. Nicolas Otamendi headed the opener before Aguero’s double, while Jack Stephens headed some late consolation for the Saints.

City relied on Raheem Sterling to dig them out of a hole against resolute Oxford at the Kassam Stadium. Joao Cancelo’s opener was cancelled out by Matty Taylor’s equaliser for the hosts, and despite Sterling’s late double it was far from plain sailing for Guardiola’s men.

City took a huge step to Wembley by outclassing their derby rivals at Old Trafford. Bernardo Silva, Riyad Mahrez and an Andreas Pereira gave the visitors a 3-0 lead at the break and it could have been more. Marcus Rashford’s second-half strike gave United a glimmer of hope for the second leg, but a 1-0 win at the Etihad Stadium was not enough for the Red Devils.